If Napoleon Never Met His Waterloo...

This book is a 2008 Cybils Finalist for Fantasy and Science Fiction. 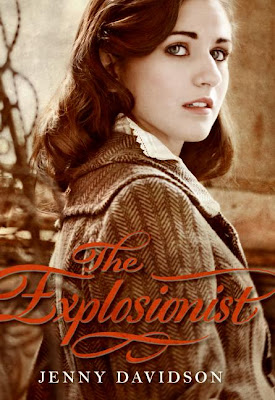 Set in an alternate history version of Edinburgh in 1938, Jenny Davison's The Explosionist is a fascinating, absorbing book -- but one that's a little hard to describe. Part science fiction, part fantasy -- maybe we could call it steampunk? -- this book is fast-paced, filled with solid writing and memorable characters.

Sophie's fifteen years have been spent in a world filled with learning, science and technology -- but also with spiritualists and séances. Orphaned by an explosion, and boarding with her taciturn and disapproving Great-Aunt Tabitha, Sophie is exposed to some of the best chemistry and science education that can be had, at school, and to Friday night séances at the home of her great-aunt. Sophie's not a fan of the spirit world, and neither does she believe in all of those ghostly presences her great-aunt cares so much about. Mainly, Sophie longs for her chemistry teacher to notice her, loves her girlfriends, and hopes someday to learn all she can, and go to University.

Unfortunately, the world teeters constantly on the brink of total war. The Brothers of the Northern Liberties -- a group of high country terrorists -- is constantly bombing everything to bits; Sophie's slightly injured in a bomb blast near the school, and her girlfriends -- and then the leads she finds herself -- implicate her beloved chemistry teacher, Mr. Peterson. University seems a far-off dream, as the government moves in to begin educating its young ladies for war. Sophie longs for peace, and feels it's her moral obligation to exonerate her favorite teacher, and to avoid the kind of position her great-aunt wants for her. She engages her trusty friend, Mikael, to help her sort things.

It turns out that people and alliances and politics are all much more complicated -- and much more straightforward -- than Sophie could have dreamed. Sophie is more important to the fate of the nation than she could ever have dreamed.

(This review can't possibly do this novel justice. Go. Read.

Run along now. The open-ended final chapter leaves room for a sequel; you'll want to get started right away. Shoo, now.)

Buy The Explosionist from an independent bookstore near you!
Posted by tanita✿davis at 3:51 AM
Labels: Adventure, Cybils, Fantasy/Sci-Fi, Historical Fiction, Magical Realism, Reviews

Wasn't it so good? I'm getting antsy for the second one!

Maybe it's just me, but the woman on that cover looks like a young Molly Shannon.