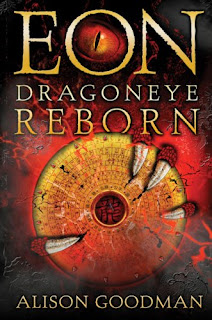 This review is based on an Advance Uncorrected Copy.

In Eon: Dragoneye Reborn by Alison Goodman, Eona's life--and her master's livelihood--depend on her never letting anybody know she is a girl. The boy "Eon," however, is being groomed for possible selection as the next Dragoneye. The council of Dragoneyes advises the Emperor and, through their deep connections with one of twelve energy dragons, they use magic to help keep the empire safe and prosperous. Only men, it is known, have the potential for these special connections with the dragons. If her secret is discovered--if anybody suspects that Eon is actually Eona--all hell could break loose.

This is a unique fantasy novel that combines a coming-of-age story with oodles of political intrigue and danger. It's unusual to see a fantasy placed in a setting that isn't somehow based on European history and mythology, so it was refreshing and interesting to see one that's based on Eastern cultural and mythological traditions. The author also doesn't sugarcoat any of the realities of life in such a setting, and life wasn't always as pretty back in the "olden times" as some fantasy novels make it out to be.

The level of detail--and, clearly, the amount of research--is exhaustive; sometimes a little too much so, perhaps, since I felt the story slowed down at times to make space for lush descriptions. That could simply be a matter of taste, too. The point is moot, since I'm already looking forward to the sequel.

Buy this book from an independent bookstore near you!
Posted by Sarah Stevenson at 11:14 AM
Labels: Adventure, AF, Fantasy/Sci-Fi, Reviews

Aaaah! Leila just mentioned this book was coming out, and I was all, "OOOH! MUST READ!!" How do you have it first before everybody!?!?!

I'll send you my copy if you want, or save it for next time you're here.

I completely agree with your last paragraph. Fascinating world, but sometimes there was just too much info about it. And despite this and my other criticisms, I also want to read the sequel.