The Cost of Blending In: Flygirl by Sherri L. Smith 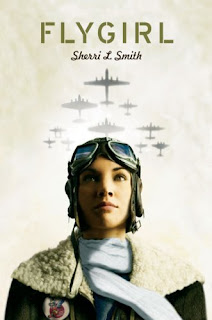 I don't know what it is about World War II that I find so compelling as a setting for historical fiction. Perhaps it's because so many of us share that history in the form of forefathers and foremothers who were profoundly affected by the conflict--and who took part in defending their country; or perhaps it's because of our current state of seemingly never-ending and very immediate conflict. Whatever the reason, I find myself resonating most deeply with stories of young women coming of age in the 1940s--stories like Sherri L. Smith's latest novel Flygirl.

What makes Flygirl different from so many other WWII stories, though, is its protagonist and her unique circumstances. Ida Mae Jones lives on her family's berry farm in Louisiana, helping her widowed mother, her grandfather, and her younger brother, and working as a house cleaner; but there's still not quite enough money coming in. If Ida Mae had been able to get her pilot's license, she might be able to help by hiring herself out as a crop duster like her father, but because she's a black woman, she's refused a license. She dreams of going to an all-colored pilot school in Chicago, getting out of the countryside and seeing the world.

Then the world comes to her--and to everyone. The Japanese bomb Pearl Harbor, and the United States officially enters the war. Her older brother, Tommy, chooses to enlist and is posted in the South Pacific as a field surgeon. It's only right, he says, to try to fight; not just the Japanese, but the Nazis, or else blacks in America--or anywhere--won't stand a chance. As time passes and her brother continues to serve overseas, Ida Mae gets more and more frustrated, and eventually decides that the only way to help her brother, and to help end the fighting, is to get on up and become part of the war effort herself.

Luckily for Ida Mae, there's a new army outfit called the WASP: Women Airforce Service Pilots. There's just one catch--colored women can't join. Because she is fair-complexioned enough, Ida Mae can do the almost unthinkable: she can pass for white, get her pilot's license, and enlist. The tension created by her secret makes her every moment in the army gripping for the reader, as she does her best to not let any telltale slips give her away. And there are positive things about life in the army--for the first time, she makes close friends with white girls her age. But the joy of friendship is counterbalanced by the pain of wondering what they would think if they knew her true identity.

The issue of "passing" is a fascinating one, and makes an intriguing premise for a novel--but it's the story of strong friendships, inner courage, and family loyalty that really binds this story together. Smith's attention to detail brings the time period, settings, and varied cast of characters alive for the reader, and the result is a seamless blend.

This review was based on the Advance Uncorrected Proof.

I just finished FLYGIRL last night and loved it. The friendships and family loyalty were balanced perfectly against the historical background.