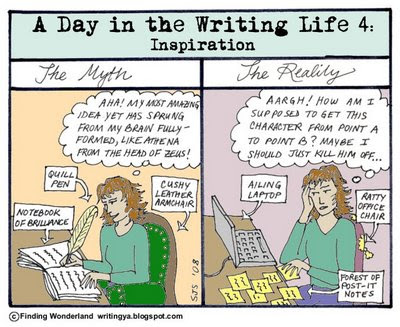 Well, we are officially about 2 weeks into National Novel Writing Month and I'm a) woefully behind, and b) embarrassed at the poor-quality drivel that has issued forth from my keyboard. I can already tell that, once the month is over, I'm going to have to valiantly rescue my poor characters--whom I do quite like--from the garbled excuse for a plot and setting I've inflicted upon them. Sigh.

OK, a couple of links for you. Via the WritersMarket.com newsletter, I heard about an upcoming new site that will be launching this month called Graphic Novel Reporter, all about graphic novels and manga for kids, teens, and adults, brought to you by the folks at BookReporter.com. I've already signed up for their e-newsletter, and look forward to seeing the site!

From Susan at Wizards Wireless, I found out about Fuse #8's post about a Children's Inauguration to take place alongside the grown-up presidential inauguration in January. Says Betsy: "You would pair it alongside that of the adult persuasion and it could be a great way to promote reading, programs that support literacy, and other topics near and dear to our hearts." Sounds good to me. I thought I'd officially mention that here, since for some reason SLJ isn't letting me leave a comment.

Don't miss a really interesting new feature over at Children's Book Insider--a YouTube video series called Children's Lit Blog Posts of the Day, spotlighting interesting blog posts from around the kidlitosphere. It's sort of surreal to be watching a video about blog posts that has in turn been posted on a blog, but it's also a cool way of getting the word out.

Lastly, along with a host of other great sites including Guys Lit Wire we got a totally sweet plug from Little Willow over on SparkLife in her post about Bookish Sites to See--and Toon Thursday even got its own mention. Woo hoo!!
Posted by Sarah Stevenson at 5:56 PM
Labels: AF, Comix, Toon Thursday, Views, World o' Blogs, Writing Daze

I want a Notebook of Brilliance. I already have a Forest of Post-it Notes.

Hmmm. How would you feel about lowering your NaNo standards? Drivel? So What? If you've got a couple of characters you really like, I call that an accomplishment.

I want a comfy window seat. Blame Dorothy Jane Torkelson for that desire.

Sigh.
WHY are you drawing cartoons of my week?????

I got your comment to show up on the site. Thanks!

I am so there with the post-its.