Poetry Friday: The Music of Gratitude 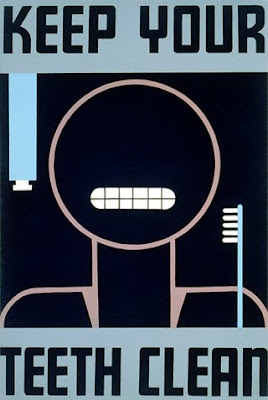 In our family, we never wanted anything to end, so we made a... "rule." It was your birthday until the cake was all gone. It was summer until you couldn't wear your flip flops (sometimes summer lasted until November). It was Sunday until 1 a.m. Monday morning. It's Thanksgiving until all the leftovers are finished.

So. Happy Thanksgiving, Part II, to many of you.

Today's poster is a post-Thanksgiving PSA, brought to you by the WPA, whose artists were making sure the nation had nice bright teeth without cranberry skins in between them. SO. After you make that nice turkey omelette this morning, do brush. Thank you.

It's still Thanksgiving weekend, time to give thanks for silliness. Entertain yourself by making a snowflake and enjoy today's Poetry Friday selection.

Man is the animal that knows

makes his living
on the docks, a stevedore,
110 lbs., carrying what loads
he can

the Depression comes along,
his teeth rot, no money, and
he has to accept silence

new teeth
and then he began
...

Read the whole of this joyful celebration of music and life here. The final stanza is one I have read over and over again:

Alright. There is a frailness
in all our music.
Sometimes we're broken
and it's lost.
Sometimes we forget
for years it's even in us, heads
filled with burdens and smoke.
And sometimes we've held
to it and it's there,

waiting to break out
walking back from the end.
...
Poetry Friday dances on at Under the Covers.

Posted by tanita✿davis at 2:30 AM
Labels: Poetry Friday, Views

This is new to me, though I've heard pieces of it in other contexts. I'm glad to be able to read the whole thing!

I love the last stanza too... Sometimes we lose the song, but it hangs on to us.

Exactly. Here's to being hung onto.

Great poem. I love the "heads filled with burdens and smoke." Exactly right.

:-) I think I was commenting here at the same moment you were commenting at my place!

"heads
filled with burdens and smoke"

thanks for this, and for sharing your house "rules." i have a birthday coming up and i think "until the cake is gone" is inspiring me to have a huge cake made...

What a life, indeed. Love that last stanza. Good reminder.

Happy Thanksgiving for as long as it lasts!

Excellent one. I love the poster, too. (The government should start employing more artists again, grumble grumble...) :)

That is so jumping I can hear the clarinet. Just the way my mother thought I would play but I never could. I love that last stanza too, but seeing them break out with "The Saints" on the way back is what really grabs me.

The snowflakes are so much fun! We are enchanted.

I can't get enough of music. I can never find the words for music. THank you for this poem. Here's to Thanksgiving, or at least to giving thanks, in perpetuity.