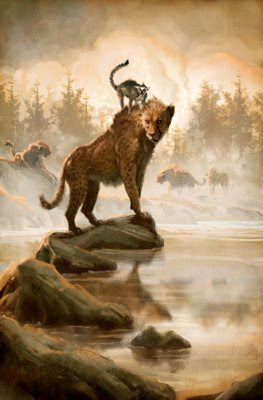 The awesome cover concept illustration to the left is by Christian Alzmann, who is an Art Director for Industrial Light & Magic in San Francisco, and does illustrations on the side. His blog is an incredibly fun place to poke around.

Ratha is back, and this time there is no Meoran. There's only...her.
The mastery of the Red Tongue means that she is the clan leader of the Named, and while there is pride in this -- she never, ever meant to be in charge.

Assisting Ratha in leading the clan are Fessran, who was the first friend of the flames, and Thakur, who reluctantly sees the changes in the clan, and fears them.
While Fessran has found her place in the clan as the head of the Firekeepers, Thakur's life has become one of lonely necessity, as he trains the herders to keep the dapplebeasts which feed the clan, and stays well away from anything to do with mating or family. Thakur's distance provides him with discernment that few other in the clan have, including Ratha, and he can see that there are troubles ahead. The herders are being treated as second-class clan, while the Firekeepers are both feared and fearful. There's a flaw in the balance of power now.

Then, Thakur separates himself from the clan and discovers that there is life beyond the Named. Though the stripe-tailed Treelings seem to just chitter unintelligently in the trees, to Thakur's amazement, he discovers that they can learn -- anything. Even to be Firekeepers. Could the clan enlarge its mind to accept another way of life? 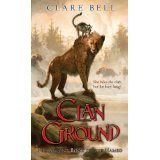 And now, there's a newcomer. One of the Un-Named, with the light of sentience in his eyes, has begged admittance to their clan.

Now that he is with them, what has he brought among them?

The second book in the Named series is just as intensely interesting and surprising as the first. There's a ton of detail that lets readers know just how much research into prehistory author Clare Bell has done. First published in 1984, they're still as awesome in this reissue.

Buy Clan Ground from an independent bookstore near you!
Posted by tanita✿davis at 5:27 AM
Labels: Fantasy/Sci-Fi, Magical Realism, Reviews

Once again, thank you for the well-done and thoughtful review of Clan Ground. I'm glad you enjoyed the book.

May I place a link to these reviews on my website?

Oh, wow! Thanks for writing great books, and you're very welcome to link to these!