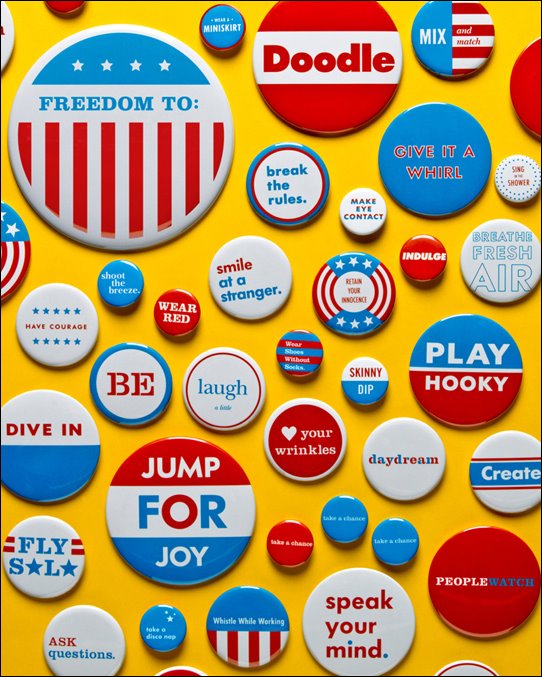 "For there is nothing mysterious about the foundations of a healthy and strong democracy. The basic things expected by our people of their political and economic systems are simple. They are:

Equality of opportunity for youth and for others.
Jobs for those who can work.
Security for those who need it.
The ending of special privilege for the few.
The preservation of civil liberties for all.

The enjoyment of the fruits of scientific progress in a wider and constantly rising standard of living.

These are the simple, basic things that must never be lost sight of in the turmoil and unbelievable complexity of our modern world. The inner and abiding strength of our economic and political systems is dependent upon the degree to which they fulfill these expectations."

The previous quote is from Franklin D. Roosevelt's January 6, 1941 State of the Union address to Congress (listen here), his "Four Freedoms" address. Freedom of Speech, Freedom of Worship, Freedom from Want, and Freedom from Fear -- those four became a rallying point for the United States during WWII. Because it was during a time of war, those freedoms were illustrated as ours to "fight for."

I'd like to suggest that freedoms are something for which you vote.

Four essential human freedoms. Speech. Religious or irreligious expression. Financial solvency. Confidence that the country will not end under a nuclear cloud. Such big, big things that even now trickle down into smaller freedoms that everyday people have to remember that they possess.

Freedom to ignore intimidation and vote. Freedom to be accurately informed, and then make up your own mind. Freedom not to tell anyone for whom you voted for or why. Freedom to take a contrary path, to go your own way, and to do your own thing.

I've often been dismissed as an idealist. I believe in supporting the rights of other people to annoy the heck out of me and to be as weird as they are. So, I believe in voting for the same reason. Even if we don't agree -- and we probably don't -- I'll vote for your right to utter strangeness, and hope that you vote for mine as well.

One of the most basic and cherished rights of any individual is the right to be left the heck alone. Rush to the polls, introverted people. Or, like me, mail in that ballot, and never even leave the house...

Read some other more erudite pieces on voting over at Chasing Ray's Blog the Vote 2008. On the master list of young adult and children's booksellers, authors, librarians, teachers and peers, people are talking about voting, the right to vote, and how this unique privilege has been a part of their lives.

I've always regretted that Norman Rockwell's vision of Americans in the 1940's was one of people of a single color and culture, and I remember as a kid straining to see even one light brown person in the bunch. The Wolfsonian Museum in Miami Beach recently reimagined this poster with their Thoughts on Democracy show (which runs through December 8th), and you can look at the results on Youtube, or check out the blog and read what the creative teams had to say about the four freedoms. The buttons are by the creative team of Kate Spade.
Posted by tanita✿davis at 4:24 AM
Labels: Happenings, Views, What We Do

Excellent. I will be there before the polling place opens. I love your post. And, I love Norm, too. He's still comforting, albeit extremely non-diverse : )

I completely support your right to utter strangeness and am looking forward to voting tomorrow. Aside from loving being able to exercise my rights and my voice, at my polling place they always give me a cookie.

Hooray! Thanks for posting this. The right to be weird is fundamental and inalienable! :)

And don't forget The Problem We All Live With by Norman Rockwell. Well, I suppose that's the 60's and you are talking about the 40s. Nevermind. I just think that piece, and his pieces on racism (like Murder in Mississippi 1965) make up for a little bit of the squeaky clean views earlier on. That period isn't often highlighted when people speak of Rockwell, and I find those later ones far more moving.

That's a great painting, Jackie--it's funny that you should bring it up, because my husband uses that piece as an example in his art appreciation classes. In fact, I think that might be in their next essay question! (Which I will have to grade...ugh.)

Don't think I didn't notice that "Freedom to Skinny Dip" button, because I did.

Yay for voting by mail! I always feel utterly spoiled when I stuff my ballot into the mail slot and am done.

Yes, support the right to vote for utter strangeness! Love the quotes from FDR. I respect him more than ever.

Lovely. And I would never dismiss anyone for being an idealist, quite the contrary. It's the idealists who keep this country moving forward.

Hmm... I think you've read differently into my comment than was my intention. I see your point, but was referring to merely the lack of controversy and issues of the time (that I've seen). He had a unique and poignant voice - I would have like to see him portray more aspects of society - not just what editors deems appropriate for mass consumption. It's merely conjecture on my part, but I wonder if his split with the Saturday Evening Post in the early 60s had anything to do with his desire for the more serious subjects that he then covered with LOOK.

Regardless, I would like to see some of what he created as a military artist during WWI. I do not in any way claim to be well educated about Norman Rockwell, I'm just going off my collective memories.

T: I hope you know that no offense was intended. It was late when I wrote that. May I claim tired synapses?

Pam: The ability to be an idealist is wonderful. As long as you can see reality, too.

...Freedom to disco-dance, too, TadMack!:) You know I couldn't resist. Anyway, thank you for blogging this.

Jac: you can claim tired synapses. And I can apologize for playing the devil's advocate.

Alkelda:... yes, I knew you and ABBA were going there.

Thanks for correcting me on my comments on Rockwell; I do remember that Golden Rule picture now! And truly, he really could only paint what he saw, and reflect the world that he saw for the people who were paying him, no? And now I'd bet he'd see it differently, as we all will.

Thanks for reminding us of FDR's vision! He was my grandfather's hero...

Oh, I'd never seen that Golden Rule painting before! It's BEAUTIFUL!

I want to have children just so I can put a framed print of it up in their room.

I probably need more reasons than that to have kids, though...