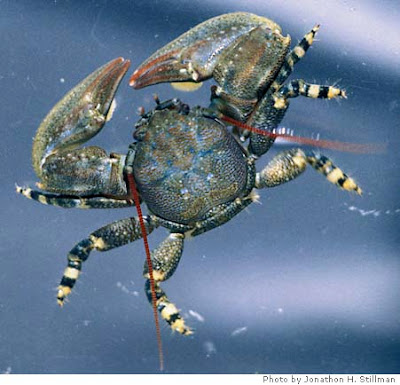 Edward Lear was just a little bit insane, as many painter-poets seem to be (Lewis Carroll, anyone? Dr. Seuss?). Lit theorists point out that he was an "absurdist" partially in self-defense; his father was sent to debtor's prison when he was only thirteen, and he was forced after that to get a job to support himself. His paintings begin to sell well by the time he was fifteen, and he was saved financially, but at the price of drastically altering his life.

Maybe it was because Victorian society was so rigid that Lear continued in his quest for silliness, maybe because his first book was published for the grandchildren of his patron, or perhaps it was because he was making up for having to grow up against his will... no one can say. Still, despite the fact that many of Lear's poems are judged to be for children, and The Owl and the Pussycat is smilingly referred to as "light verse," there always seems to be a couplet or two that makes sense. A little. You just have to squint and tilt your head sideways...

Cold Are the Crabs That Crawl On Yonder Hills

Cold are the crabs that crawl on yonder hills
Colder the cucumbers that grow beneath,
And colder still the brazen chops that wreathe
The tedious gloom of philosophic pills!
For when the tardy gloom of nectar fills
The ample bowls of demons and of men,
There lurks the feeble mouse, the homely hen,
And there the porcupine with all her quills.
Yet much remains -- to weave a solemn strain
That lingering sadly -- slowly dies away,
Daily departing with departing day.
A pea green gamut on a distant plain
Where wily walrusses in congress meet--
Such such is life--

This poem was published posthumously, so we can only assume that brazen has, in this context, its original meaning, that of "made of brass," and that chops are jaws. That still doesn't make much sense of the poem; my only amusement is in agreeing that a.) crabs and cucumbers are cold, and b.) "such such is life." It's a little anti-climactic -- and fatalistic, but true.

This one amused me, since it seems to be about politics:

When "Grand old men" persist in folly
In slaughtering men and chopping trees,
What art can soothe the melancholy
Of those whom futile "statesmen" teaze?

The only way their wrath to cover
To let mankind know who's to blame-o--
Is first to rush by train to Dover
And then straight onward to Sanremo.

Politics bites; go on vacation. I can get behind that.

I wonder how many ministers found this one un amusing:

It Is A Virtue In Ingenuous Youth

It is a virtue in ingenuous youth,
To leave off lying and return to truth,
For well it's known that all religious morals
Are caused by Bass's Ale and South Atlantic Corals.

Poetry Friday today is hosted over at Holly's Brimstone Soup. Those of you who are poetically inclined are also invited to check out the Winter Blog Blast Tour and peruse author interviews with the funny and talented Nebula-finalist Elizabeth Wein Gatland, the affable author-illustrator D.M. Cornish, the inestimable Tobin Anderson, aka M.T., and YA newcomer and awesome stay-at-home Dad, Dave Anderson. There are tons more interviews with brilliant, funny, self-deprecating on tap for today. Consider:

And don't be afraid that if you don't read these interviews this minute, they'll vanish. Chasing Ray is keeping all the links right here.
Posted by tanita✿davis at 4:34 AM
Labels: Poetry Friday, Views

Maybe he's railing against the "tedious gloom of philosophic pills"---a great description of self-important verse if I ever heard one.

Great post, as always - this is a wonderful community you've rallied up!

Lear is a touchstone of my boyhood days, and remains so. In his defense (not that he asked or requires it) many an artist spend their lives trying to recapture the uninhibited state of childhood. Picasso's late drawings and Cezanne's Jazz cut-outs celebrate this child-like simplicity. I find that Lear gets lumped as a "nonsense" poet simply because the straight world has a hard time accepting the lighthearted as equal to the serious.

Thanks for highlighting some of his non-limerick poems as well.

Nonsense is one of the essential nutrients for the creative spirit, and Lear did it so well. Thanks for the post.
I added this blog to my Google Reader.

I wonder if by "chops" he means muttonchops, as in sideburns...so, brassy-colored muttonchops? That's what I envision, anyway... :)

I do love Edward Lear. For reasons I can't explain that first one make perfect sense to me.

I am celebrating finishing writing the term's last dog gone term paper today and just put several Elizabeth Wein books on request at the library. YAY! Thanks so much for the Blog Blast links cause I've missed almost all of them and I am determined to catch up.

I've been reading Lear aloud to my daughter, and she with her literal mind keeps asking, "What does this word mean?" and "What is a Quangle-Wangle?"