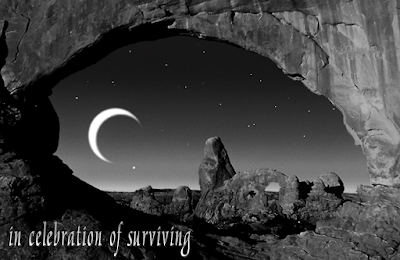 "Success is counted sweetest," Emily Dickinson says, "by those who ne'er succeed."

I always assume she means that this is because the one who has not achieved success continues to struggle and strive, while the successful person relaxes into the lauds and laurels that are his due.

I guess that depends, really, on how one considers the nature of the success; if we consider a success for one person, then maybe they do relax and reflect on a job well done, and then the moment is over. However, if that success is a team effort, the satisfaction of the whole makes success doubly sweet as it echoes and reverberates between the most tepid members to the fervent and earnest.

Personal victories are extraordinary to watch, as gripping to hear as personal survival stories. Everyone has their "down in the valley" tale, which they may or may not ever share, but you can identify those moments when they have struggled to the mountaintop by their joy, despite the January chill.


in celebration of surviving

when senselessness has pounded you around on the ropes
and you're getting too old to hold out for the future
no work and running out of money,
and then you make a try after something that you know you
won't get
and this long shot comes through on the stretch
in a photo finish of your heart's trepidation
then for a while
even when the chill factor of these prairie winters puts it at
fifty below
you're warm and have that old feeling
of being a comer, though belated
in the crazy game of life

standing in the winter night
emptying the garbage and looking at the stars
you realize that although the odds are fantastically against you
when that single January shooting star
flung its wad in the maw of night
it was yours
and though the years are edged with crime and squalor
that second wind, or twenty-third
is coming strong
and for a time
perhaps a very short time
one lives as though in a golden envelope of light

Poetry Friday is hosted by librarian Ms. Mac at Check It Out.

Pssst. Have you taken the Comment Challenge? Mother Reader & Lee Wind have cooked up a challenge to the YA and children's lit blogosphere to become a more cohesive community and support each other in blogging, thinking and writing for the next twenty-one days. That ties in all too nicely with my commitment to lift weights and start working on that running thing again (all your fault, Colleen), only the Comment Challenge will have prizes. Okay, theoretically lifting weights has prizes, too. But mostly not.

What has changed for writers, now that the President-elect is a writer? From Dr. Susan,

The universal appeal of his books may help move work by other writers of color from the "ethnic" or "black interest" bookstore ghettoes into the mainstream where they belong. (Next on the agenda: recognition that books by women and LGBT writers are also real literature. But that's another, post-euphoria post.)

Read more here, and add your own thoughts in the comments.
Posted by tanita✿davis at 4:05 AM
Labels: Poetry Friday, Views

"emptying the garbage and looking at the stars" Funny, that's when I look at the stars most, too. And the moon. I go out to roll the can to the curb, and there is a spectacular light in the sky and I stand there way too long next to the remnants of my consumerism and enjoy the irony of it. Poetic, huh?

This poem has so many powerful little moments...and I guess that's one of the themes, too.

Oh, I missed this one yesterday.

I've always had a more pessimistic take on that Dickinson poem -- I always think of it as meaning that an "unsuccessful" person spends a great deal of time imagining that "reaching success" will change everything for the good, whereas those who have already "succeeded" in their field or a particular endeavor, realize that success doesn't always bring the happiness they'd hoped for.

I'm taking the comment challenge. The result so far is that I'm way behind on my blog reading, because it takes longer. It's not even so much typing up the comments - it's reading through the posts with an eye for where to comment. This takes longer than my usual skimming.

Good luck balancing this with exercise. I'm working on that, too.