We Interrupt This Packing To Say: POETRY FRIDAY 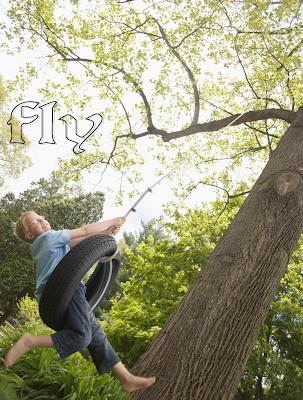 This week, my brother told me that he is officially "Talking To A Girl." This is not to say that he has never talked to a girl before, but this is the Official Talking where he grins a lot, and willingly converses with me for a half hour or so and sends me two or three emails in a week. This might not sound huge to you, but he's generally a man of far fewer words.

The little twerp who used to be part Howler monkey and run around shrieking, using my body as a springboard and jumping off of things has now rounded a corner on the way to -- whatever else is next. Because he honestly couldn't tell you. I say, "So, cool, talking. What's after Talking?"

The poem I chose today is a paean to earlier days and the urge to madness that still exists within my "little" brother - and in all of us. Hope you find time to run 'til you drop.


When I was five and

pent-up desire for the unknown built in me


a head of steam I had

no other way to let off, I ran

at top speed back and forth

end to end of the drawingroom,

deliberately into the rosewood

desk at one end, the shaken

window-frames at the other, till the fit


wore out or some grownup stopped me.

But when I was six I found better means:

on its merry gallows

of dark-green wood my swing, new-built,

awaited my pleasure, I rushed

out to it, pulled the seat

all the way back to get a good start, and

vigorously pumped it up to the highest arc:


my legs were oars, I was rowing a boat in air--

and then, then from the furthest

forward swing of the ropes

I let go and flew!

At large in the unsustaining air,

flew clear over the lawn across

the breadth of the garden


and stood up uninjured, ready

to swing and fly over and over.

The need passed as I grew;

the mind took over, devising

paths for that force in me, and the body curled up,

sedentary, glad to be quiet and read and read,

save once in a while, when it demanded

to leap about or to whirl--or later still


to walk swiftly in wind and rain

long and far and into the dusk,

wanting some absolute, some exhaustion.

- by Denise Levertov, from This Great Unknowing: Last Poems. New York: New Directions Books © 1999.
Do NOT miss the new Nye poems at Seven Impossible Things Before Breakfast, and Kelly's darling original piece to Kid2's first grade teacher -- I hope Mrs. O gets to read this one. The Poetry People are at Wild Rose Reader, hosted by Elaine.


Posted by tanita✿davis at 1:35 AM
Labels: Poetry Friday, Views

I don't remember reading this one before but I instantly love it. I have a five year old in my house who hurls himself up and down the hall shouting. I needed to be reminded of that "undifferentiated energy, animal spirits,pent-up desire for the unknown built in me". Oh yeah. And what better place to fall dazed than love-in-a-mist? How sweet it is to have a little brother.

Of course you should interupt packing for a good wild poetry swing! And who better than Levertov?

My "little" brother was so close-mouthed about his love interests that when he finally mentioned the name of one of them, I knew he was going to get married to her. He did.

Heh. I didn't get a NAME until I made one up for her. I started calling her Lovely Senorita, which made him laugh so hard he finally gave up and dished.

He's only sixteen, though, so I can still break him. In a few years, I won't find out anything!

I've not seen this one, but there's so much I love about it...

"Some grownup stopped me." I'm usually in the "some grownup" role now... I have mixed feelings about that!

Swinging... Have you ever looked at the photography collection 'The Family of Man'? I loved it as a child, including one photo of an old man pushing an old woman on the swing, both of them with absolutely childlike delight on their faces.

Good luck with the packing! Thanks for posting this great poem.

Tadmack: I feel like I KNOW your brother. I wonder why?

What a wonderful poem and here's to a beautiful first love for your brother!

Good luck with the packing!

Holy crap, what a good poem. It's driving, a force of nature.

Not enough time to talk. Gonna go read it again.

(and congrats to your brother)...

I'm pretty sure this is why I teach older kids, whose minds have "taken over" a little bit and allow them to be quiet every now and then!

This poem has me energized! Happy packing and thanks for the jolt!

Have fun packing. And oh to be a swinger 9of swings or birches).