Her trumpet section thinks she’s scary. She screams a lot and constantly threatens them. She’s a COMPLETE obsessive control freak. Ellie Snow couldn’t care less. Ever since that day freshman year when she made such a fool of herself over her best friend’s older brother -- in front of everyone at band camp -- Ellie’s shut down the dating drama, said bye-bye to boys, and has been driven toward her goal –to shine as the best trumpeter in her high school history. She’s section leader of the trumpets and first chair in band, and after four years of avoiding the emotional chaos of the hell known as High School, she’s on her way out.

Marching band means everything to Ellie – the strict cadences, right angles, and 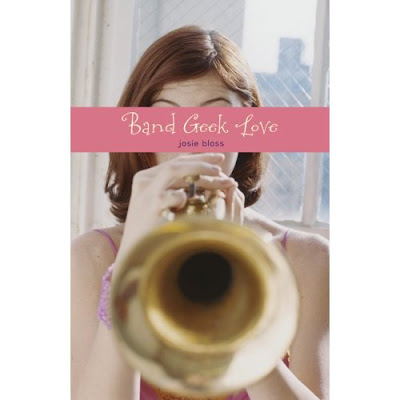 creased, perfect uniforms have been an oasis of sanity in her life. It may be out of balance to be All Band, All the Time, but if you say anything to Ellie about it, she might just go upside your head with her instrument. This is her life the way she likes it. Her goal is to make her Senior year be perfect – down to her trumpet solo at Homecoming – and nothing and no one will get in her way.

Unfortunately, all of Ellie’s plans are about to go up in flames.

Connor Higgins is tall and gorgeous and plays trumpet like a pro. He likes her. And he’s a …sophomore. And if that isn’t enough, the boy she made a fool of herself over is… back.

Ellie’s in way over her head, and everything is out of control.

Readers may want to throttle acid-tongued Ellie because her perfectionism and cluelessness can be tiresome and at times she’s simply flat out mean. She’s not the most sympathetic of narrators, but when four years worth of drama catches up with her, Ellie’s insecurities as she negotiates the new world of emotions are pathetic and realistic. Anyone who has tried to control what other people think of them will recognize the flailing and freaking out that Ellie does as she realizes that the world is what it is, and she’s not in control of anything.

Connor Higgins at times comes across at times as ridiculously well-rounded, mature and wise for fifteen, and Ellie’s parents are conveniently one-dimensional until the end of the novel, but taken all together, this is a bumbling, geeky little love story that may make you smile.