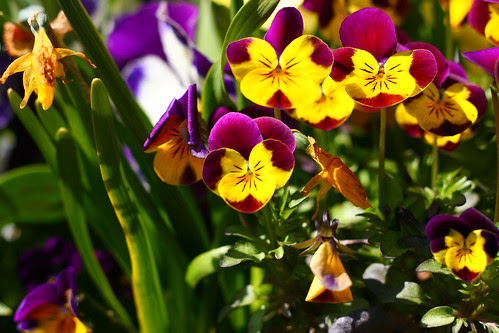 Happy May Day!
In the past, today one got up early and bathed one's face with the dew in order to beautify oneself. Today also traditionally included maypoles dances and anonymously left flowers, but in Scotland, the first of May kicks off... Labor Day Weekend! Still, I think we all deserve flowers today -- we're working, right? At least working hard to avoid work...

This meme has been ricocheting around the YAlit blogosphere for awhile, and I've been tagged by a food blogger friend, Holler. It's the book meme: you know the one. You:
1. Pick up the two nearest books.
2. Open to page 123.
3. Find the fifth sentence.
4. Post the next three sentences.
5. Tag five people and acknowledge who tagged you

I always wonder at the random nature of these things. Surely it makes more sense to pick the fourth sentences after page 123? And then post sentences five, six and seven? Oh, well, who am I to argue? I have a massive stack of books littering the area around my desk, as I am finishing up SBBT questionnaires (Yay! Summer Blog Blast Tour, May 19-23: Authors and Illustrator interview extravaganza, coming soon to a web of blogs near you!) and working on my pile of Flux reviews for The Edge of the Forest, so this will be easy. And, it will offer a tantalizing glimpse into books not yet available!

No spoilers, here -- that's my only rule. If my three sentences are something that might give away the plot, I'll set the book aside and choose another from my TBR list.

My first pull is one you'll see from Flux in August of this year. These three sentences are ...interesting:

"What?" (No whining. That's a single word sentence.)
"It's just so funny. Back in sixth grade, he asked me to this CCD dance."

That was the teensiest glimpse into Carrie Jones' latest novel, Girl, Hero, in which high school freshman, Lili, writes letters to John Wayne in hopes of figuring out how to be her own hero. That's the short description -- it's way more than that, including Mom's freakish boyfriend, a witchy ex-best friend, a sister in trouble, and more. This one looks really good. Stay tuned for my review on Readers' Rants.

Okay, my second pull brings out one I've recently finished, Sarah Beth Durst's Out of the Wild. Eisha and Jules if you're not to page 123, LOOK AWAY.

She thought of Gillian's story. She thought of the tourists at Graceleand. What if, instead of fleeing from the Wild, people actually flocked in? 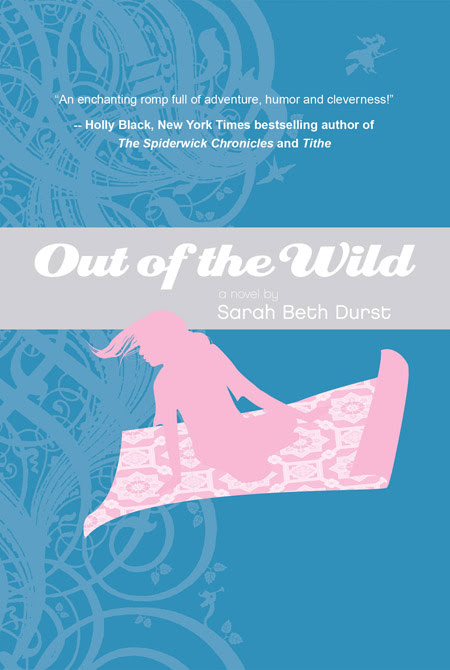 If you've read Into the Wild, then you know what the danger is here. If you haven't -- run, don't walk, to your library or bookstore. It's an MG novel enjoyed by YA's, and well worth the read. I launched myself into both the novel and its sequel in the space of a weekend and wanted to see more of the author's work. It was that fast-paced, realistic, and great!

Out of the Wild is available from Razorbill in June!

Also, stay tuned for an awesome TRI-REVIEW of Out of the Wild with Jules and Eisha at Seven Impossible Things Before Breakfast. Yes, I now join the ranks of Betsy Bird and Mr. Horn Book in being invited to a tri-review. Color me excited!!

Since this meme's been around for awhile, I won't tag anyone new -- unless you haven't played, then consider yourself tagged! Happy May Day! This month will be full of vampires, interviews, searches for political reads, new graphic novels, cartoons, and other book-madness on Wonderland. Enjoy!
Posted by tanita✿davis at 2:00 AM
Labels: Random Notes and Errata, Views

Hi Tadmack, Thanks for doing the meme! I was totally oblivious to this meme floating about! Oh well!

Happy May Day to you! I love May.

Jules, still reading Out of the Wild....