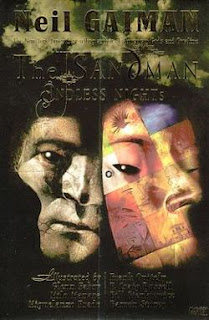 In the preface to his compilation of stories revisiting the Sandman comic, Endless Nights, writer Neil Gaiman conveys the idea that coming back to the surreal, lushly realized world of Dream, Destiny, and the other Endless felt like a sort of homecoming. To me, someone who spent my late high school and early college years eagerly devouring that world, it was much the same. It had been a few years at least since I'd even re-read any of the graphic novels, though I still have many of those (and several original comics as well) on my bookshelf. Opening Endless Nights, with its inimitable Dave McKean book design, felt like coming back years later to a vivid recurring dream.

This particular volume is not an ongoing serial story or even a set of interlinked stories. Instead, it presents a single vignette for each one of the Endless: Dream, Death, Destiny, Delight/Delirium, Destruction, Desire, and Despair. Each vignette is written by Gaiman but visually realized by a different artist. Some will be familiar to those versed in the U.S. comics world, while others are better known in European circles. However, each one presents a fascinating angle on Gaiman's writing and on the already very distinctive characters he created. If you're a fan of Gaiman's Sandman, you'll enjoy this all-too-brief return to that world. As for myself, I'm about to go back and do some long-overdue rereading of some of the first "grown-up" comics I ever bought.
Posted by Sarah Stevenson at 11:49 AM
Labels: AF, Fantasy/Sci-Fi, Graphic Novels, Reviews