Most people wouldn't want to be the guy in the dunk tank, but the guy on the other side -- you know, the dry one, with the balls in his hand, and the leisure to aim at the red lever to drop the clown in the water. Most people wouldn't want to be the dunk-ee, but Chad does. Walking down the boardwalk at the Jersey Shore where he lives Chad has observed a real pro of a Bozo seated above the 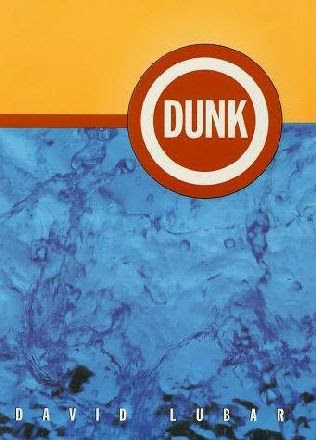 tank, and he sees that the guy's got power. He reels people in -- unsuspecting marks -- by insulting them in a genuinely clever fashion. He nags them and pushes their buttons until they buy the three balls that will -- they hope -- Dunk him in the tank and shut him up. Nobody ignores him. Nobody can ignore him. He's got power over their fears and insecurities. He can laugh at them -- and make them laugh, a little... It's all about control.

But Chad can control... nothing. But himself.

In an intense and fast-paced novel David Lubar brings us a not-so-simple story of a summer between boyhood and manhood, where Chad learns that some power is not worth having, and other power has been his for the taking all along.
Posted by tanita✿davis at 6:30 PM
Labels: Guy Appeal, Humor, Realistic Fiction, Reviews