The cool chicks at Seven Impossible Things Before Breakfast, by way of Journey Woman 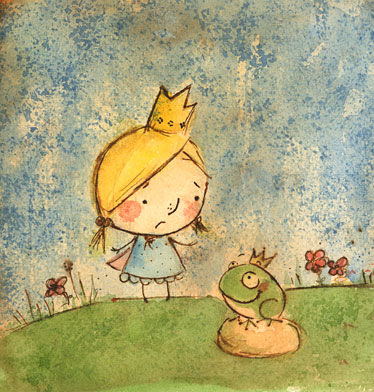 pointed out a fun new site for me - Artista, the blog of a cartoonist from Budapest, Hungary. Arista's evocative little works of art are beautifully emotional in spite of their simplicity.

This little cartoon, of course, reminded me of the Disney Frog Princess kerfluffle and I had a little chuckle over the continuing fervor being raised around this movie.

Initially, I hesitated to voice much more than a passing objection to the fact that Maddy - unlike any other Disney "Princess" character, had to earn a living - as a chambermaid, and had a nickname instead of a name. I wanted to be much more vocal about it, but that was to admit to having seen all the other Disney Princess movies (Cough! I have a younger sister and a niece, give me a break!) and viewing them closely enough for cinematic criticism! Now I am a glad to report that many other people got so exercised about this not-even-near-release film that they called it racist, and wrote letters of protest. Maddy, they claimed, sounded just like Mammy. (And I thought: Whoa. Even I hadn't thought that far!)

Disney made some rapid changes. Maddy is now a euphonically correct - but dubious Tiana (I don't know, people, sounds just like tiara...), and said Tiana has returned to the ranks of the idle Disney rich as a non-chambermaid; The Frog Princess, so as not to potentially offend anyone French (!) is now called The Princess & the Frog, and we all will live happily ever after in liberty, equality and fraternity. Or something.

Meanwhile, I rather like this little princess. She still knows how to frown.

Finally, congratulations to Laura from Tockla's World on the birth of Cassiopeia this past Sunday, the newest star in the firmament, and to Our Ms. Bird, the 8th sizzling Fuse, who is about to explode into a larger audience, blogging for the School Library Journal. Mazel tov, and we'll see you over there!
Posted by tanita✿davis at 4:35 PM
Labels: Random Notes and Errata, Views

This cute princess reminds me of one of my favorite story princesses--the Ordinary Princess by M. M. Kaye, which I clipped out of Cricket in serial form and saved, I loved it so much. It's charmingly illustrated by the author--a tale of a princess given the dubious fairy godmother gift of Ordinariness. It is honestly one of the sweetest stories I can think of and not at all in a cloying way.

I actually knew nothing about M.M. Kaye until just now, when I found her obit (she died in 2004) and believe me, it is fascinating reading.

I love the princess picture! And I just tagged you two for a meme. Of course you can skip it if you're busy... Have a great week!

I tagged Finding W'land for a meme if you would like to play along.

So are the blogs that we tag supposed to be kidlit blogs, or can it be other bloggers we know? I'm sure all the kidlit folks we know have been tagged by now! :)

That illustration is great, too!