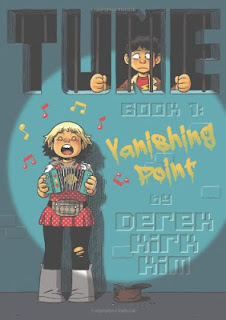 Reader Gut Reaction: How could I resist a book about a kid going to art school? In San Francisco? Not gonna happen. This one's got an almost irresistibly fun premise that will appeal to older YA and adult audiences—the kid who's pressured by his parents to do something productive with his life but instead decides to go to art school. Then, horror of horrors, he decides to DROP OUT of art school. That goes about as well as you might expect, but then, finally, a job offer does materialize: it's just…not what anyone expected.

A job offer from interdimensional aliens? From a parallel universe? One of whom is a major grump and could pass for an alien version of Red Forman from That 70s Show? Sure, as long as it's got benefits.

Concerning Character: I couldn't help immediately relating to main character Andy Go. I went to art school, too (and in San Francisco, too!). So it was definitely entertaining reading about the antics and woes of Andy and his illustration-major friends as they navigated the treacherous waters of art school. Young adult readers will relate to that feeling of thinking you know exactly what you want to do, but having insufficient knowledge of how the world really works to put your nebulous plans into action. I cringed with recognition when Andy said "It was dawning on me that I had been way too cocky in not only my illustration skills, but the amount of work available in the field."

And then his parents torment him, asking him why he didn't major in computer science, like so-and-so's successful son. (Also disturbingly familiar to me.) On top of it all, he has a crush on his super-cute friend Yumi, but doesn't have the guts to tell her. Andy is funny, flawed, and familiar—and his friends are entertainingly weird and goofy. And then there are the aliens…but I don't want to give too much away. The manga/manhwa-influenced drawing style and funny, informal narration lends humor to what could be simply a series of painful life situations—and it also suits the sci-fi elements well.

Recommended for Fans Of...: Derek Kirk Kim's other GNs for young adults, like Good As Lily (reviewed here) and The Eternal Smile (with Gene Yang, reviewed here), and other graphic novels that take place on the cusp of adulthood, like Gene Yang's Level Up (reviewed here) which also contains elements of magical realism. Fans of sci-fi humor will also enjoy it—and it's only Book 1!

Themes & Things: That tough, unpredictable period between being a college student—when you think you know everything and have big plans—and being a young adult out in the world making your own way…it can be a rude awakening, and that's the case for Andy as for many of us. It's a huge life transition, and one that isn't always dealt with in either YA or adult fiction. I'm happy to see another contribution to the list of literature that tackles college and post-college life. In addition to that overarching theme, Tune also contains a lot of classic threads like the tension that develops between Andy and his parents, as he resists their directives while still having to live at home; and of course the unrequited (or is it??) love for Yumi. And then there are the aliens: could they be Andy's big moneymaking break? What's the right choice? I won't tell you what Andy decides, but I will mention that the end of the book leaves you hanging, waiting for Book 2. So if you hate cliffhangers…well, you can always go check out the webcomic.

You can find Tune, Book 1: Vanishing Point by Derek Kirk Kim online, or at an independent bookstore near you!
Posted by Sarah Stevenson at 8:00 AM
Labels: AF, Fantasy/Sci-Fi, Graphic Novels, Humor, Magical Realism, Reviews