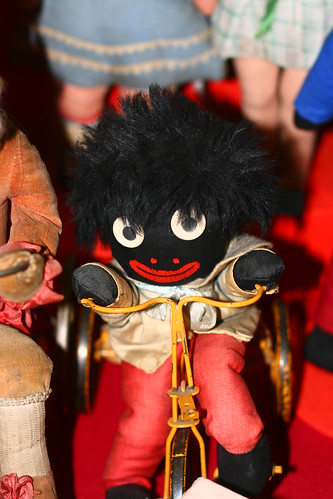 Children's lit aficionados have talked about this before - bowdlerizing children's books, trying to brush away evidence of an intolerant past. It's something American librarians, teachers, and parents have wrestled with, whether to remove TIKKI TIKKI TEMBO, and TINTIN from their collections, or to put the BARBAR books out of the reach of impressionable children. This time it's not the Americans concerned - it's the Germans, according to a report in the English language version of Der Spiegel, this past Wednesday.

The book in question is THE LITTLE WITCH ("Die kleine Hexe") which was written in 1957 - and which uses the word "Negro" as a descriptive term for two little boys.

"The two little Negro boys didn't come from the circus. No more did the Turks and Indians. The Chinese women, the cannibal, the Eskimo girl, the desert sheikh and the Hottentot chief were not part of the show either. No – it was carnival time in the village. The children had a half-holiday from school because of the carnival, and they were romping about the village square in fancy dress."
- translated by Anthea Bell

While apparently all of these children are German children in costumes - the Brit English translation of the phrase "fancy dress" - ostensibly only the word Negro is objectionable, possibly because there are children in blackface? Since the children are merely children playing, without an adult directing their play, the offensiveness might be hard for the average person to spot. It's a hard call for the German publisher, Thienemann Children's Books, as they insist that they only change word in order to allow new readers to understand the text. Much like the British publishers who eliminated words like "swotting" from the newer editions of the Enid Blyton "Famous Five" books, it's all about repackaging to create a new audience, to the publishers. So, to publishers, Negro is a confusing and long-ago word no one uses anymore. Okay, fine. But, what are they going to put now? To lovers of books, sometimes change = desecration. It'll be interesting to see which way this ends up.

Meanwhile, those who wrung their hands over the Evil Dark That Is Children's Lit should be gratified to visit Cornell's "Wardrobes and Rabbit Holes: A Dark History of Children's Literature" exhibit that runs through March 22. Items from Cornell's rare manuscripts room will be shown in the Samuel L. Hirshland Gallery at Kroch Library. People can then prove to themselves that the darkness in children's lit began rather earlier than they might think, from the scary 19th century "Der Struwwelpeter", all the way down to Harry Potter. Thank you, Cornell, for putting together a program which will satisfy people who just knew children's lit was going to the dogs... and for the rest of us who think original 19th century children's books are fairly awesome. 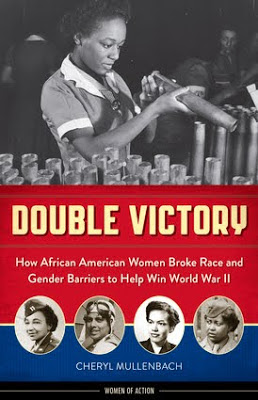 I've meant to mention a couple of new releases which have come on scene this year. One is DOUBLE VICTORY by Cheryl Mullenbach. Full disclosure: I had the chance to read this book when it was just a neatly collated paperback ARC. Even without the gorgeous cover and sharp B&W photography, this was a fun, fun book to read, telling more detailed and individual stories of women who broke both the color barrier and the gender barrier to support the effort in WWII. I know a lot of people are "over" WWII, and wonder why so many stories this year are coming out of that time. Because the U.S. is constantly IN war nowadays, future generations must never, never, ever forget it, lest we make the tragic past again someone's future. These are important books.

Tanya Lee Stone's COURAGE HAS NO COLOR is the story of The Triple Nickel - the 555th Paratroopers - the only all African American paratrooper team during WWII. With pages and pages of photographs and lots of research, this is the kind of nonfiction stuff that I love. These stories are affirming and validating tales of the history of African Americans of "the greatest generation" and a reminder to present generations that they, too, have their part to play. COURAGE HAS NO COLOR is out from Candlewick January 22nd.

Periodically my agent goes to conferences and big ALA dos and returns talking about the forecast in children's lit, but that's usually after he pops over to Italy in February. Both Scholastic Books and YALSA President Jack Martin, have put out an earlier scoop on what's trending so far this year. In no particular order:

@ Jennifer R. Hubbard: Hah. Yes, well. Those are OLD stories, which means that they're still okay, you know.