Is Your Plot Manhandling YOU? 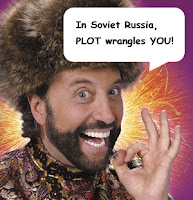 I know, that sounds like the punchline to some sort of bad Yakov Smirnoff joke ("In Soviet Russia, PLOT manhandles YOU!") but I'm pretty sure we've all been there. We think we're actually plot wrangling with the best of 'em, but the control is just an illusion.

I find plot wrangling to be the most difficult during a first draft. Arguably, maybe, I shouldn't even be trying to wrangle the plot while in the midst of just trying to get something resembling a story onto the page. Of course, I'm also not the sort of person who plans it all out ahead of time, plotting each scene in a detailed outline. I tried that before. It neither increased nor decreased the amount of revision I needed to do later. And, since I found it tedious and restrictive, I didn't do it again. Instead, I work with a looser notetaking strategy, which I can tighten as needed if it feels like things are spinning out of control--or, even better, if it feels like everything is coming together and I know exactly what has to happen. Actually, I find that keeping my notes loose in the beginning is more conducive to things coming together later in a more fluid and natural way. But that's just me--everyone's got different methods of working with plot.

We've been talking about it a lot in our writing group. One group member works with the Beat Sheet idea from Blake Snyder's Save the Cat, which is a screenwriting tool. It seems like an intriguing way to approach it--from the perspective of a filmmaker, yes, but also in terms of figuring out how each event functions in the overall plot arc.

Another group member has recommended the tome Story by Robert McKee, which also happens to be about screenwriting.

There are books and articles galore about plot, and it seems as though I've read a great many of them, but I nevertheless feel like I'm bumbling about when it comes to plot--as long as I don't crash into something and create a catastrophic mess, I feel like I've succeeded. At the same time, I have to make my characters do the crashing and messing up. Yet I also have to be in charge. A conundrum to fell the mighty, no doubt about it.

I can't do a detailed outline either. I have a general idea of what happens and what the climax is, and subplots develop naturally as I go. Sometimes I find out the climax is different from what I thought. I just use general rules as I go, like: the MC should be challenged on his biggest flaw; something should happen in every scene; there should be a goal or an unanswered question driving the forward momentum.

Let's see if I can remember what I wrote...I find it very reassuring that others are non-outliners, too. Once Tanita and I saw Walter Dean Myers speak at an SCBWI conference, and he has this whole complicated scene-by-scene grid thingy that really freaked us out.

I usually do something similar to what you're talking about, in that I try to remind myself that every scene needs an arc and should accomplish some purpose, and I try to keep that purpose in mind as I write. Not sure how successful I am, but I guess that's what revision is for!