TURNING PAGES: A Song for Bijou, by Josh Farrar

What attracted me to what can only be described as a middle grade romance? Was it the adorable cover, the adorkable main characters, the title, which includes the singular of my favorite French word, or the spicy hints of conflict? It was all of the above, plus a soupçon of culture and compassion, all rolled together in a little American-Haitian story of first love.

Reader Gut Reaction: I'm very hard on love stories; I feel like in YA lit they tend to be too cinematic, too much of what a particular author wishes happened to them, instead of what most often happens. Full of zingy one-liners and intelligent patter, they keep readers on the sideline to watch the performance of love. This novel allows readers to participate a bit more - because there are missteps and obvious Bad Guys, and the winces and cringes as the main narrator, Alex, runs into walls, and the flinches as secondary narrator, Bijou, misunderstands things, are very real...

Concerning Character: Alex Schrader just noticed girls five minutes ago, and he's Mr. Obsession. Last year it was Angela. This year it's ... Bijou. Bijou Doucet... She has an amazing name, she has an amazing face, she has little butterfly beads on the ends of her braids....

Alex is smitten, in the cute, dizzy way that isn't often ascribed to boys in literature. He's just a mess, and she's slightly horrified... and not just because Alex is horribly shy and barely able to look her in the face. Refreshingly, it's not even because he's Caucasian American and she's Haitian, and completely clueless about the country or the culture. It's because He's A Boy. And she, Bijou Doucet, doesn't want a boyfriend.

Why is that boy staring at her? Why is he always red? Bijou, dear readers, is Not Impressed. Yet.

Throughout the novel, the dueling narrators are quite clear on what they do and do not want. There are a few rough spots; the conclusion is a little too fast and tidy for me. At times, I found their voices to be a bit mature for their ages, and I sometimes felt their emotional responses were a little lacking - but I also know that not every kid is Full On Drama 24/7. Despite their noisy - interfering and at times really unkind - schoolmates, these are two quiet people wondering both who they are, and who the other person might be - and they both find they're willing to risk quite a bit to find out. 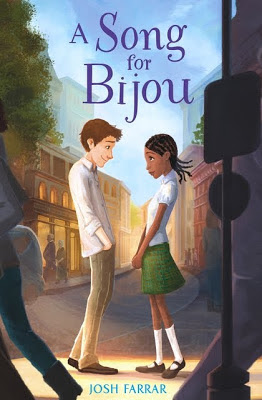 Themes & Things:Because Haiti has been, politically and environmentally, eviscerated over and over again, I knew that disaster was going to be a part of the novel - it would have been disingenous to have a novel set in modern times completely not mention the recent and devestating earthquake. HOWEVER. Do you know how many novels there are NOT about just plain-old-day-to-day Haitians, who live, and fall in love, and go to school? This is a love story - so the bits of Haiti which are included in the book aren't all about abject poverty and loss - and I'm so glad. These are two things which Americans all too often associate with Haiti as if that's the only thing it has going for it. Haiti is a proud country, with a rich culture and history - food, music, kicking slavery's butt - some great stuff happened there, and the author touches on these things with intent.

Another quiet theme in this novel is honesty - which is another good MG topic, because the preteens are when the lies we tell our parents possibly get... bigger. There's a lot of fodder for discussion in this!

Cover Chatter: Slightly big-headed preteens gazing adorkably at each other on a busy city sidewalk is WAY TOO CUTE. This cover makes me want to hug it, and the people nearby. I'd say we can call that a win.

FTC: This was an unsolicited review and the ARC was shared courtesy of the publisher, Bloomsbury, via NetGalley.

AFTER FEBRUARY 12, 2013, you can find A SONG FOR BIJOU by Josh Farrar at an independent bookstore near you!

Posted by tanita✿davis at 6:04 PM
Labels: A Cybilsm?, Class and Identity in YA literature, Ethnicity and YA Literature, Middle Grade, Multicultural Fiction, Reviews, Romance

"I feel like in YA lit they tend to be too cinematic, too much of what a particular author wishes happened to them, instead of what most often happens. Full of zingy one-liners and intelligent patter, they keep readers on the sideline to watch the performance of love."

That is exactly why I rarely review YA romances. They are nearly always more about the author's wishes for their teen years then the wholly fictional actions of the characters. You articulated it so much better than I ever have. Sigh. This is why I love you so. :)

@ Colleen: I think that cinematic thing actually also contributes to the culture of performance - we watch the world go by, the boy talk to the girl, the angst and the agony - but I think that engenders an attitude of waiting for life to come to you, instead of jumping in. At heart, MG romances seem to be just more real. (Of course, I'm happy for anyone to point out where I'm wrong.)

@ Lin: It's SO cute. There aren't a whole lot of interracial romance novels that are so free from the expected drama - this one works.

More importantly, this is a romance book primarily FOR BOYS. Name five of those fast! Even though we get Bijou's point of view, this really felt like it was Alex's book. Boys do want to read romance books, but only from their point of view most of the time. This definitely succeeds on that level!