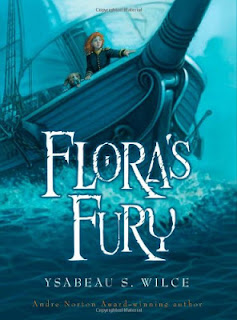 Reader Gut Reaction: I was very excited when I saw this one at the library. It's the third volume in Wilce's Flora Segunda books, and it felt like it had been a little while since I'd last read one. I always enjoy being plunged into the fantastical alternate California that the author has created, Califa, with its sort of Wild-West feel and strange forms of hereditary magic floating around and its fearsome Aztec-like Huitzil warriors south of the border threatening Califa's sovereignty.

The political intrigue continues to thicken as part of the backdrop of this latest installment, but as before, this is Flora's story. Now that she's found out more about who she is, she's got to keep it a secret if she wants to stay safe—but that doesn't stop her from using her magick to try to find Tiny Doom, who….spoilers if you haven't read the first two books…is really Flora's mother. (I had actually forgotten about that, it had been so long since I'd read the first two; it took me a chapter or two to get my bearings.) Flora is convinced that Tiny Doom is alive somewhere, and she does everything humanly (and sometimes inhumanly) possible to try to find her, from using dangerous magick to consorting with were-bears to manning a military outpost in the hot desert, all the while trying to avoid being caught by the Huitzil magician who's hunting her family.

Concerning Character: Flora is, as always, an impetuous heroine who is ultimately sympathetic and likeable; she wears her emotions on her sleeve, but she's learning a bit of discretion, too. It's the characters who really make this story shine. The fun and fantastical setting is icing on the cake, of course, but the conceits (and I mean that in a neutral sense, not as a criticism) of the world-building never distract from the heart of the book—the completely believable actions, emotions, reactions of Flora, of her friends and family. In this volume, Flora has begun to truly come into her own and try to make her own way in the world, and as a consequence she accomplishes more—and gets in more trouble—than she ever thought possible.

Recommended for Fans Of...: Fantastical fiction about worlds that are very much like our own, but not quite—like DM Cornish's Monster Blood Tattoo books, or maybe even Catherynne Valente's The Girl Who Circumnavigated Fairyland (reviewed here) or The Last Dragonslayer by Jasper Fforde (reviewed here).

Themes & Things: Flora, at sixteen, is really just beginning to learn who she is and to define herself, and then there's the whole complication of finding out her mother, Buck Fyrdraaca, isn't her real mother after all—that role's reserved for Tiny Doom, whom you may remember from the first two books. Flora feels betrayed by them both—angry at Buck for lying to her for all those years, and angry at Tiny Doom for not being there. The mother-daughter issues felt familiar and true, and were at the heart of this one, but there's also plenty of potential romance (not to mention adventure and danger) to keep it from being heavy on the family drama. Wilce handles those themes with a light touch, letting them inform and deepen the story without intruding on the adventure part.

You can find Flora's Fury by Ysabeau S. Wilce online, or at an independent bookstore near you!
Posted by Sarah Stevenson at 8:00 AM
Labels: Adventure, AF, Fantasy/Sci-Fi, Reviews, Steampunk