Today's review is kind of a two-for-one—two books in the same series, which I sadly thought was a trilogy and was all excited that I was able to get the last two books at the same time and therefore wouldn't have to wait around in suspense to end the story, BUT NO, there is a fourth book coming. And really, I don't mind, because sometimes it takes as long as it takes for the story to end, and Jonathan Maberry has written an action-packed and suspense-filled story that just gets meatier and meatier. Um, no pun of any kind intended there. 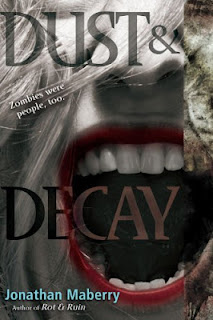 Reader Gut Reaction: I've said it before: I'm not that big a fan of zombie stories, for a variety of reasons. But I read Rot & Ruin, the first book in this series, for the Cybils a while back (reviewed here) and enjoyed it a lot more than I thought I would. Besides compelling (and mixed-race!) characters, it had nonstop plot action, an intriguing post-apocalyptic setting, high stakes, and bad guys who were way scarier than the zombies. It also had enough flashes of humor, romance, and coming-of-age to balance out the suspense and the scary stuff. That all continues in Books 2 and 3, in which we keep following the adventures of Benny Imura, his older brother Tom, and his friends. (MINOR SPOILERS to come in the rest of the review, so if you haven't read book one, consider yourself warned!)

Since they glimpsed the jet plane at the end of Book One, Benny and Nix have been obsessed with finding out what's out there—whether there really is still civilization somewhere in the great Rot & Ruin. The small town of Mountainside only offers denial and constant sameness, so they decide to set out into the unknown to try to find the source of the jet, with experienced fighter Tom as their guide and the Lost Girl Lilah as their defender. But things quickly go wrong and get out of control, as they encounter crazed animals, even more crazed humans, and, of course, legions of the living dead.

Concerning Character: Everything this story throws at Benny and his friends seems designed to test the characters' mettle and fortitude—they're stretched to the limit again and again in different ways, but of course this reveals a lot about the inner strength at the core of each of them, and what is driving each one on this possibly fruitless journey. 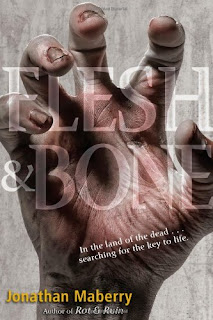 We learn a lot about Chong and Lilah in these two volumes, as each one gets their own side story—Chong, the physically awkward intellectual who really doesn't feel like he belongs in the great outdoors, really sets the plot in motion. Meanwhile, Lilah, who considered herself impervious to everything, hardened by years on her own in the wilderness, is shocked by her sudden vulnerability now that she has, once again, people to care about who care about her. And of course we continue to follow Benny and Nix, the two primary characters, as their bond is tested time and again by violence and tragedy and the harshness of the world they live in. Oh, and there are also super scary villains. I shouldn't forget to mention that.

Recommended for Fans Of...: The Forest of Hands and Teeth and its companion books, by Carrie Ryan; The Knife of Never Letting Go and its companions by Patrick Ness; and other dark post-apocalyptic suspense.

Themes & Things: Courage in the face of adversity—if I had to pick a pervasive theme for these two volumes, that would probably be it. Each of the characters has to figure out what courage and bravery truly mean, and some of them have a more difficult time of it than others. But they all come to realize that you don't necessarily stop being scared; you just end up doing what you have to do anyway.

Cover Chatter: All I can say is, they're appropriately EWWW.

You can find Dust & Decay and Flesh & Bone by Jonathan Maberry online, or at an independent bookstore near you!
Posted by Sarah Stevenson at 8:00 AM
Labels: Adventure, AF, Fantasy/Sci-Fi, Guy Appeal, Reviews, Suspense

I'm not usually a huge fan of zombie books, but Jonathan's series changed my mind about them. Loved the characters. And yes, ewwww.