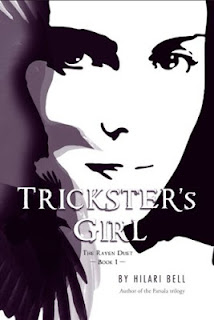 Reader Gut Reaction: I used to be a huge fan of Native American mythological tropes in fiction. Then I became old and read way too many books and realized it's a theme that has been, if not done to death, certainly hashed and re-hashed until I got to a point where my eyes want to roll whenever I see such things as the premise for books.

However, I didn't always feel this way. I certainly didn't feel that way as a teen reader—quite the opposite. So I put a temporary gag on my cynical adult self when I picked up Trickster's Girl, Book 1 in The Raven Duet. Yes, tricksters abound in YA fantasy. Yes, we've angered the spirits of nature by ruining our environment time and again. Hush, you—THIS BOOK IS GOOD.

Not only that, it manages to squeak just a teensy bit of the dystopian/futuristic setting in (which I'm apparently NOT sick of yet—go figure) along with the fantasy, which is unexpected but, weirdly, it really works. It's unobtrusive, mostly—cars and motorbikes that are rechargeable; portable folding solar panels; personal "pods" that serve as phones, recorders, and data devices all in one; that kind of thing. The implication is that the story's taking place perhaps a hundred years from now, but society's structure hasn't substantially changed.

Concerning Character: Kelsa is fifteen years old. She rides one of those rechargeable motorbikes. And at school she's sort of an outcast, but it's mainly because she's been preoccupied over the past year with her father dying of a rare, aggressive cancer. At the start of the story, her father has just died; because he was a scientist so connected with the study of trees and ecology—he was researching what's been making all the trees start to die from a mysterious disease—Kelsa has decided to go AWOL with his ashes and bury them in the shade of an ancient tree. It just seems right somehow, and damn the consequences.

But in this case, the consequences are more bizarre than she could imagine. A beautiful but strange and only quasi-socialized boy shows up and says he's Raven. Nope, not his name—he says he's THE Raven. According to him, the tree disease, maybe even her father's cancer, these are just symptoms of something a whole lot bigger. And he's somehow decided that Kelsa has to be the one to help him heal the earth. What could possibly go wrong?

Recommended for Fans Of...: Fantasy authors who incorporate a lot of mythological elements into their work, like Charles De Lint, Laini Taylor, Karen Healey, Robin McKinley.

Themes & Things: Throughout this book, as you might expect, there is a strong environmental theme: what we've done to the earth, what can and can't be healed, what we've already done whose consequences we can't even foresee. As Kelsa gets to know Raven in all his imperfect, exasperating, tricksy glory, we think a lot about the nature of trust. And as Kelsa decides to help him, to help the trees her father loved so much, we watch her learn about her own sense of personal responsibility, of how and why you decide to make something out of your life beyond people's everyday expectations of you.

You can find Trickster's Girl by Hilari Bell online, or at an independent bookstore near you!
Posted by Sarah Stevenson at 8:00 AM
Labels: Adventure, AF, Fantasy/Sci-Fi, Mythology, Reviews

I really enjoyed this book for it's simplicity - none of the elements (such as futuristic or magical) were overdone or shoved in your face like a lot of other books are! I still need to read the sequel, however.