Reader Gut Reaction: I think this book was impressive to me because the character of Celaena Sardothien was impressively ...much. Impressively filthy. Impressively foul-tempered. Impressively unlikable. It takes a lot of courage for a writer to GO THERE, to make up a character her readers may not like -- whom she herself may dislike -- and then slowly but surely let her grow on them, like a particularly noxious mold. It worked.

Ardalan is an impressively dark country. The prisons are grim, the slavery is more grim, and the King - oy. There is no magic. There is no light. There is no chance in Ardalan, nothing lives but the King's will.

Into this dark landscape is sketched an epic tale. 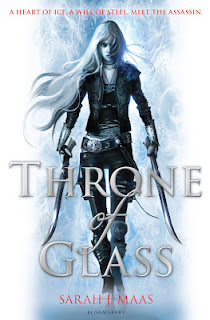 Concerning Character: Celaena Sardothien is a thug. She's a killer, cold-blooded, and by the laws of Ardalan, she flat-out deserves to die. Right? I mean, a.) Kill, b.) Die. That's generally how it goes. And yet, this killer has survived the Salt Mines of Endovier -- killed overseers and guards, and is still kicking. Something is unusual about this chick. Her reputation precedes her, for one thing. Her name brings on a frisson of fear. Ironic, really - because she's a teen girl.

It turns out that Celaena is a killer because her country has been enslaved - and those whom she kills have in some way been responsible for the deaths of her family. Though in some ways, her imprisonment is just, in other ways, her response to a greater injustice begins to make since, as Prince Dorian of Ardalan frees her. Of course, there's a catch: he frees her and ensures that she might die - or live - by how well she serves his father. As the King's Champion, she'll have a chance to serve the most evil man alive - the man responsible for the deaths of her family.

There's a fabulous Girl Power thing going on in this novel; between Calaena and Princess Nehemia, another near prisoner, there's friendship, intrigue, sword fights, and a really high body count. Just the thing for a holiday afternoon.

Recommended for Fans Of...: This book brought THE PRINCESS BRIDE to mind, as well as GRACELING, by Kristin Cashore, SHADOW AND BONE, by Leigh Bardugo and - duh, obviously - GRAVE MERCY, by Robin LaFevers...and everyone says, GAME OF THRONES by George Martin. Having not read that one yet, I will just throw that out there and let you decide. 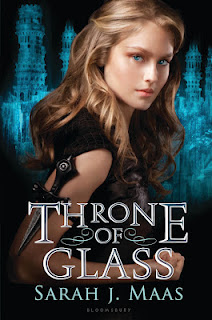 Cover Chatter: I am not fond of faces on covers, so neither the US nor the UK/Commonwealth covers of this novel work for me all that well. However, I find that I like the US cover better simply because we know from the story that Calaena liked knives and had them strapped all over. The fantasy killer on the other cover, with her dual swords and flowing hair is ... sorry, kind of a joke. If you have hair like that, you're letting someone pull it to cut your throat. Reality fail. I know! I know! It's a fantasy novel! However, I like things to be a little more grounded; the UK cover looks almost cartoon-y.

Authorial Asides: This is Ms. Maas's debut novel; she rejoices in twenty-six years on this earth. This is heartening; there's a lot more time for her to produce many more fun and adventurous novels.

You can find THRONE OF GLASS by Sarah J. Maas online, or at an independent bookstore near you!

Posted by tanita✿davis at 12:20 AM
Labels: Cybil, Fantasy/Sci-Fi, Reviews

Sounds quick and action-packed. If I see it, I'll check it out!