Time for another flip through some pages. This one I chose because I happened to be strolling through the library (heads up, FCC! Thank you) the other day, and saw the title of a book that was the subject of Charlotte's most recent Waiting on Wednesday. Obviously, the chance to read it first, and crow quietly under my breath that Charlotte hasn't yet is something I couldn't pass up! Also, the model on the front of mine had Charlotte-y hair, as opposed to the US version, which just has a vague female face and a bird on it -- borrrr-ing! Actually, I'm joking, that's nothing like Charlotte's hair. Except sans brush, and in very, very high humidity...

I must say, the covers for this novel vary so much - the audio book cover is ...scary. What's that about? Not sure what they were trying to depict there. But - onward! 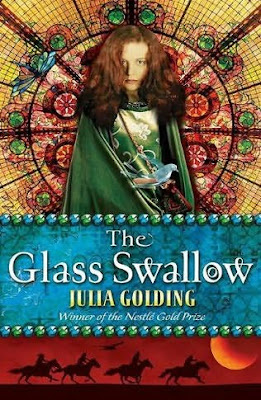 Reader Gut Reaction: I really do love craft fantasy, and the idea of Girls Doing Stuff, in an olden-days (this is semi-medieval) kind of setting. I love stained glass; I worked in a stained glass factory in high school, and I know both the drudgery and the delight of seeing bits and pieces of inch thick glass come together as a glorious, cohesive whole. I think the topic was wonderful, the varying kingdoms detailed and interesting, and the characters well-drawn.

Concerning Character: Rain is a well-beloved daughter of a glasswright, the widower, Torrent, and she herself has mad stained glass designing skills. It is she who is responsible for her father's success - she designs and he creates. Unfortunately, it's illegal where they live for girls to go to glasswright's school. Rain's father decides to buck tradition, and teach her anyway, but it's bad news to her cousins, who stand to inherit the shop when Torrent is gone. It seems best and easiest to send her away for awhile, on a journey, on behalf of the King, to a faraway land called Magharna.

Peri is the son of scavengers -- that's the name of anyone who hunts or deals with dead bodies in his country. He's a falconer, anywhere else, bringing in the food that feeds the hungry wealthy of the city, but his caste is of such untouchable lowness that he must be ceremonially bathed before going into the city, even on business, and no one of high caste is to speak to him, much less touch him, without frantic bathing, spitting, and fury. Even animals which are hunters are treated in the same fashion, so no cat fanciers among the rich and titled. But Peri is patient - patience personified, really. Somehow, none of all of this touches him. He has his birds, he has his family, and the families of the other scavengers. What does it matter, what the Master and the wealthier castes get up to? His world is small and peaceful, and he is sure of himself, in that he knows the boundaries of it. When he meets Rain, her life at risk at the hand of a bandit, everything he knows is turned upside down. Misunderstandings and mistakes abound - and prejudices, and vast, life-changing love affairs. 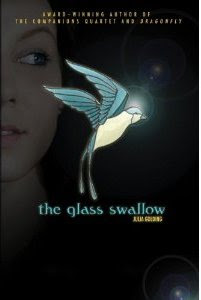 Recommended for Fans Of...: Heather Tomlinson's Toads & Diamonds, and Disney's Aladdin. Honestly, Rain has something Jasmine-y going on.

Themes & Things: Because this is a love story at heart, things like turning aside prejudice, and that the pure in heart can accomplish anything through love are the loudest themes. Determination and cooperation are also themes that reemerge first for Rain and her father, then again for Rain and her new community.

Authorial Asides: While this book has won an award, it wasn't quite a win for me. The beginning is filled with Rain's flashbacks, and inner-mind; it's description-heavy and without action or dialogue for too long. I expected a strong female character, because Rain identifies as a craftswoman, but her character was difficult for me to get a handle on - she seems passive and wooden in the beginning of the novel, going where her father bids her, doing what he says, in spite of her misgivings about her father, her cousins, and her fate. She encounters trouble, not speaking the language well enough, but resigns herself to passively follow orders -- and then suddenly, she has miraculously mastered the language, and, preternaturally optimistic and idealistic, she determines it is up to her to Save The World. 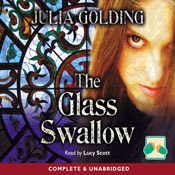 As the other main character, Peri's surreal patience makes him a bit unrealistic as a real human being for me. Once he meets Rain, his patience is no longer his hallmark. Abruptly, he begins to act very Alpha Male in a way which is hard to accept, but which I suspect the readers are meant to find amusing or endearing. I didn't - perhaps because I didn't really ever get much of an emotional connection with him one way or the other, though I love the description of his birds and enjoyed the depiction of the closeknit scavenger community. While it is human nature to root for True Love, it was difficult, in this case, to get a feel for the romance, what with the backdrop of reforming an entire society and Righting Old Wrongs.

I think the biggest problem for me is that I was told a lot and shown less. That's a rule one can get away with breaking a lot in fiction, but it has to be done for a reason. There was a lot of struggle and emotion I wish I could have seen in this characters, and a lot of reaction and thought-process I was told about that I could have done without.

Popular British author Julia Golding has created a novel stuffed with a lot of action and tension. One of the joys of booktalking is our many opinions - you may entirely love it, and be whirled away from your own world, or you may feel there's so much going on, you don't know where to look. Unarguably, there's a great deal of atmosphere and detail in the setting, which is just wonderful, and the culture and class settings show a great deal of invention.

I'd love to hear other opinions about this novel, from those of you who received copies of the book from your forays at the ALA and other bookish stops this summer. Cheryl Rainfield really loves it.

Julia Golding's THE GLASS SWALLOW is coming to the U.S. in October, but hopefully not with the same sinister looking audio cover! Either way, find it at an independent bookstore near you!
Posted by tanita✿davis at 1:47 AM
Labels: Class and Identity in YA literature, Fantasy/Sci-Fi, Reviews

Charlotte has lovely hair, even if it's not quite so Rebekah Brooks-colored!

Now you've got me thinking about that cover model - I'm almost certain she's the same one used on Golding's Cat Royal books (the US versions, at least). Which is a little weird, since this book obviously has nothing to do with Miss Cat.

(Charlotte DOES have enviable hair. I merely pester her to see if she will come here and pester me. It's an adopted sibling thing.)

...as for the Cat Royal books - you're right! The cover model DOES look remarkably like her. Golding has been very fortunate in her American covers, at least. There's that...

Oh goodness...I can only wish my hair was as gloriously chestnutedly untrammeled as hers! I think it looks more like my little sister's hair, of which Much Was Made when we were young--she has the whole titian waves thing going...

I would love to try working in a stained glass factory, btw. So much cooler than my own high school babysitting work!

And I continue to look forward to this book....ungrudingly pleased for you that you got to read it first!

I MUCH preferred managing a diamond-bladed saw to caring for a squishy and breakable child in high school - glass breaks, and you go get another piece. (Your boss scowls, but - meh. You learn.) A kid breaks, and ... well, parents can be SO prickly about these things.

Except for the color, seriously, Charlotte, this looks like your hair to me! And you are very sweet, to be undgrudging. :)

Thanks, Marinela.
See, Charlotte, your fan club is expanding. ☺

I do like the sound of this one's premise, for sure. I couldn't help thinking about the other Tamora Pierce series, the Circle of Magic I think it was called. I think one of the girls did glass magic...