Right off, I knew this would be a tough one. With a title like Guantánamo Boy, I knew I would be doing some sniffling.

People: I don't like to cry. I so did not want to read this book.

And yet, I requested it from NetGalley (hi, FCC, .pdf ARC here, thank you), because to not read it would be cowardice. I can't hide from the facts of Guantánamo Bay prison. The ugliness that snatched people of Egyptian, Arabic, and in some cases, South Asian descent, and thrust them into trauma is real. The world is still full of fearful, knee-jerk, panic-driven, vengeful, racist people, and as a reader and writer I need to not hide my eyes because mean people suck, and sad things make me sad.

You need to read this book. I won't lie; I can't say I loved it, and want to read it over and over. It's not that kind of book. Frankly, parts of this novel may really mess you up. But it's worth a few tears, because it makes you think. 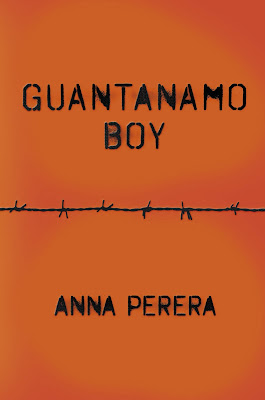 Reader Gut Reaction: The story was like a lot of novels I've read which are set in England -- a lot of "footy with the mates," a lot of visits to the corner store, and hanging out with people. In short, the Rochdale of this story is very, very ordinary, to begin with.

Khalid, an Afghan-British boy, leaves Rochdale and travels reluctantly to his father's home town over Easter holidays. At the home of his relatives he is generally bored -- solely concerned with chatting online with his cousin, playing the online multiple shooter game his cousin has made, sleeping in as long as possible, and finding his father, who one afternoon disappears.

In searching for his father, Khalid ends up being in the wrong place at the wrong time, and then a long, terrifying, maddening, dehumanizing, and unjust nightmare begins.

Craft & Design: There's a lot of information in this book -- information about culture, countries, tradition, ethnicity -- and there was every chance that sections of the book would have had great plains of information dumps littering the landscape. I found that not to be the case. Perera carefully intersects the narrative arc with the tremendous amount of information that she has to convey. The novel reads like historical fiction, nonfiction, and yet -- story. There is definitely a distance in the writing -- at times, it seems the whole tale is a nightmare that is happening to someone other than to Khalid -- but as he returns home, the immediacy returns to the text, and he comes back to himself.

The plain, orange cover of the novel evokes the hideous orange prison jumpsuits and is relieved only by a string of barbed wire. The German cover, which features part of a face with a pulled-up hoodie, is evocative in its own way. I'm not sure which one works better, but the orange one says "adult crossover" to me much more than the German one. Maybe that's what the publisher was after.

Incidentally, this book came out in the UK in 2009, and received important critical acclaim, including being shortlisted for the Costa Children's Book Award.

Concerning Character: Khalid couldn't be more ordinary, as I've said before. He's surrounded by kids his parents like, and kids his mother disapproves of -- because they're clever and not respectful, because they wear their pants saggy, because they listen to loud music -- etc. -- Regular stuff. Khalid's siblings are just ordinary little girls, his father and mother, though they have cultural things which shine through, are still your regular old, loving, nagging, complaining parents. He sneaks extra time on the computer, rolls his eyes at his father's stories, and lusts after a girl at school. I really appreciated that the author gave us so much normalcy to hang onto before the story took the steps which led to Cuba. 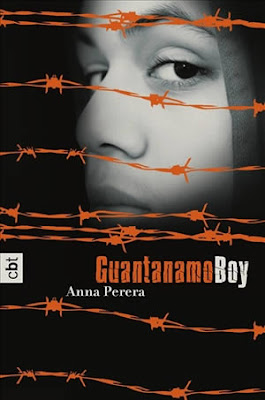 I have to admit that I was afraid, since the author, Anna Perera, is British, that the novel would be slanted to lay the weight of blame solely at the feet of the Americans. While that would have been reasonable - technically we started the war, and the prison is under American jurisdiction - Perera says in the author's note that "there really is no 'them,' no 'they' -- there is only us -- and more us." (Quoted from an advanced reader copy.) I wondered, would she really lay this at the feet of "us?" She did. In Guantánamo, Afghan soldiers, MI5, the CIA, the soldiers, men and women -- all of "us" are seen. There are moments of humanity -- toothbrushes, chocolate bars, the meeting of eyes -- from unexpected supporters. The light is shined equally on all of the hate and hysteria and the tiny moments of goodness as well. Perera strives to present a balanced world. Her book seems to ask, "could this really happen to someone? To one of "us?"

In a world where reactions are ruled by racism and fear? Yes. Unequivocally.

And that's the best reason to read it, and to pass it along. Because, not only should everyone know, everyone should know and be upset by this, and think, "How can I make the world so this CAN'T happen to someone?" I think that's the point.


Anna Perera is going to be on her American book tour in September of 2011. Come August, you'll find GUANTANAMO BOY being pre-released at an independent bookstore near you, and you'll definitely find it after September 1.

What a frightening book to read. Now I can add "being hauled off to Guantanamo for being in the wrong place at the wrong time" to my ever-growing list of reasons why I'm scared to ever visit my relatives in Pakistan.

Seriously, though--rather coincidentally I just read A Thousand Splendid Suns by Khaled Hosseini, which takes place in Afghanistan against a backdrop of decades, but specifically also shows what life was like there during the recent past. Also a difficult read, especially since it concerns the lives of women forced either by parents or circumstance to marry against their will.

I put off reading this for as long as I felt I could -- I put off requesting it for that long, too. Ugh. The Hosseini book has such a lovely sounding title -- sounds like difficult content there as well.

It would be so lovely if you could visit your relatives in peace. That is my wish for you.

Oh, thanks. The other issue, in some cases, is overcoming a rather substantial language barrier...but that I have more control over.