Dear FCC: I received an Advance Review Copy of this book from ALA Midwinter in January. I think I've almost made it through my ARC pile... 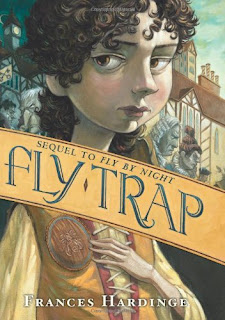 Fly Trap is the sequel to Fly By Night, the story of twelve-year-old orphan Mosca Mye and how she and her viciously (perhaps homicidally) loyal goose Saracen ended up traveling in the company of a shifty con man with a heart of gold, Eponymous Clent. Two very mildly evil geniuses can get into a lot of trouble together, and in this sequel, Mosca finds herself going, of course, from the frying pan into the fire in the decidedly two-faced town of Toll.

Reader Gut Reaction: One thing I love about Frances Hardinge's books is that they're full of delightful cleverness without being overly or gratuitously clever. This volume is no exception, as the author takes the fascinating naming conventions of Mosca's world and works them into the plot in a most ingenious way. I don't want to give too much away, but I will say this: Mosca learns the hard way that prejudices that seem superficial may in fact run irrationally deep. What's in a name, indeed? Evidently quite a lot, if you were unfortunate enough to be born during the hour of Goodman Palpitattle, the lord of the flies.

Concerning Character: Although there is zero shortage of action and adventure in this book—kidnapping, daring escapes, outlandish plots, and so forth—in a way the entire plot revolves around the idea of character: specifically, what one's character really means and whether it's predetermined or something that you earn. In terms of of specific characters, Mosca is the plucky, smart-mouthed and adventuresome moppet fans will remember from the first book, and her relationship with Clent is that of a mentor and apprentice, with just a hint, perhaps, of an uncle indulging his favorite niece. Neither one wants to be vulnerable, so it's all hints and subtext here and there, but Hardinge makes it clear that they're fond of one another, beyond the fact that they depend on each other for their survival in an increasingly hostile environment.

Recommended for Fans Of...: Stories about plucky young heroines, like the Wolves books by Joan Aiken and the Theodosia books by R.L. LaFevers.

Authorial Asides: You all probably know I am a huge Frances Hardinge fan. I particularly thought that The Lost Conspiracy, the book she released just prior to this one, was brilliant, and I'm consistently amazed at her ability to bring an unusual setting to vivid, believable life. Fly Trap is out now in hardcover.

You can find Fly Trap at an independent bookstore near you!
Posted by Sarah Stevenson at 8:00 AM
Labels: Adventure, AF, Middle Grade, Reviews

Since I loved her first book, I almost want to reread it before reading this one - but the way she writes indicates to me that it won't be necessary - there will be umptybillion other crazy things in the new book that will catch my attention immediately...

Yes--I thought about it too, but like you said, ultimately there were enough new things to catch my eye and enough subtle recap to fill me in on what I did need to know from the first book.