Thursday Review: WITH OR WITHOUT YOU by Brian Farrey

Dear FCC: I bought an electronic copy of this book. Additional Disclaimer: This book was written by my editor, who is a debut author in his own right. 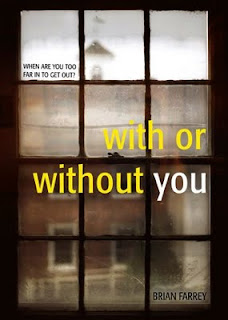 Reader Gut Reaction: With or Without You is a story of love, friendship, family, and holding fast to what makes you you despite overwhelming pressure to do otherwise. At the beginning of the story, graduating senior Evan Weiss seems to know exactly who he is and where he's going—specifically, he and his best friend Davis are getting out of Madison, where they have to endure the taunts and beatings that go along with being gay, and heading for college in Chicago in the fall. But not only do his plans change quicker than he imagined, we as readers also learn that there's a lot of uncertainty hidden beneath Evan's calm surface.

This wasn't an easy book to read in the sense that it was painful to bear witness to the way gay teenagers are treated in many places in the U.S. At the same time, it was also distressing to see the dysfunctional way some individuals choose to respond to mistreatment—distressing because it rang so true.

Concerning Character: The narrator Evan Weiss is a truly relatable and engaging character, generally clearheaded, with a strong sense of himself that keeps him afloat during times of trouble—unlike his friend Davis, who tends to glom onto every new thing that gets him excited and then discard it later, whether it's a hobby, a new friend, or a new cause. When Davis finds out about a new group for gay teens called the Chasers, he leaps in with both feet. But Evan, more cautious, has a weird feeling about it all.

Not only that, Evan doesn't have time for a new group he doesn't much care for to begin with--most of his spare time has been taken up with either work at his parents' store or with his boyfriend, Erik. I loved how the relationship between Evan and Erik was portrayed—it was loving, solid, and realistic, a refreshing change from a lot of mainstream teen fiction in which relationships are shown as melodramatic or dysfunctional. I also thought the family relationships were shown in a believable light, both the good relationship he has with his sister and the more troubled and distant relationship with his parents.

Ultimately, though Evan seems wise beyond his years, his lack of experience in life and in relationships causes him to make a few major mistakes. How Evan chooses to deal with these situations gives the story a personal angle; it's not simply an "issue book." In a few spots I wasn't sure if Evan's reactions seemed consistent with his personality, but, that aside, I found this an absorbing read, and an important one.

Recommended for Fans Of...: Books about the journey to finding out who you really are, like any of John Green's novels but particularly Paper Towns and Will Grayson, Will Grayson. Books portraying strong, positive gay teen relationships, like David Levithan's Boy Meets Boy.

Authorial Asides: You can visit Brian Farrey's blog and website. And, if you want to find out why I feel like the luckiest writer in the world as far as editors go (well, one reason why, anyway), you can read his bio. Two words: Doctor Who!

You can find With or Without You at an independent bookstore near you!
Posted by Sarah Stevenson at 8:05 AM
Labels: AF, LGBTQ, Realistic Fiction, Reviews, Romance, Sibling Fiction

Ooh, yay, mysterious groups. This sounds like it's twisty.

I'm becoming grudgingly impressed with the number of great gay novels coming out which aren't issue novels, and which deal with the dude relationship as loving and solid - this is a relief.

Congrats to Brian(and yay to Dr. Who), and good luck to another debut writer!

This was so good. I loved Evan and Erik's relationship.