Dear FCC: I received an Advance Review Copy of this book from ALA Midwinter in January. 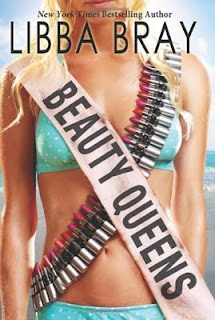 What could be better for a Fourth of July review than a book about a planeload of Miss Teen Dream USA pageant contestants who crash-land on a (nearly) deserted island? Um, probably a lot of things, but it sort of fits a Yay America theme, right? Right. I mean, just look at that cover. (I think it's really clever, despite my general dislike of headless teenagers on YA book covers.) Oh, and there's adventure, pirates, romance, an insane third world dictator, and an evil soulless corporation with a

Reader Gut Reaction: I've enjoyed Libba Bray's books—they're always good fun with a dash (sometimes more than a dash) of craziness—and I admit to being immediately drawn in by the wacky and wicked premise. This was in many ways a very gutsy book in terms of its structure, in that there are not just multiple narrators, but MANY narrators. Told in a relatively omniscient third person, something like five or seven of the 12 surviving crash-landed beauty queens get chapters of their own throughout the book. That worked reasonably well for me, and I enjoyed the "extras" sprinkled between chapters, like fake commercials for Corporation products and beauty queens' data sheets. I wasn't as hot on the footnotes, which I found distracting. I hate to get on my high horse, but I sort of feel like unless you're Terry Pratchett or David Foster Wallace, it's pretty tough to pull off the amusingly sardonic footnote. Still, a very fun book, with plenty of humor, hijinks, creatively used fashion items, and inconveniently revealed dirty secrets.

Concerning Character...and Themes: I was impressed by how much depth the author created in the narrating characters considering there were so many of them, and considering we as readers are constantly switching from one to another from chapter to chapter. There was a sort-of "main" character in Miss New Hampshire, Adina Greenberg, whose viewpoint starts off the story and who is immediately placed as an outsider relative to the other characters—she's an undercover school journalist who wants to take the whole pageant down.

However, as we gradually find out more about the other contestants, of course we learn that none of them is simply a cookie-cutter pageant girl. They've all got something that sets them apart from the crowd, and over the course of the story they learn that rather than trying to suppress those things that make them unique in order to fit into a pageant mold, their differences can be strengths. I'm kind of in awe that the author was able to develop a set of characters who were mostly, at the beginning, satirical caricatures, and turn them into fleshed-out human beings, while still retaining strong sense of humor throughout. Again, a gutsy maneuver.

You can find Beauty Queens at an independent bookstore near you!
Posted by Sarah Stevenson at 8:00 AM
Labels: Adventure, AF, Girls Fiction, Humor, Reviews, Romance

I've been of two minds about that cover, because I, too, HATE the hardbodyheadless thing going on - but even with the lipstick, it sounds worth a read.

Bray did a great job developing the pageant girls stories. I loved them. So much so even though I skipped the chapters not relating to the contestants and the footnotes, I still rated the book 4 out of 5.

Also loved that its incluviseness felt natural. It was more proof that Brown and overall diversity makes everything better.

Agreed! I really enjoyed the diversity of the characters, and you're right--it felt natural to the story rather than forced.