The End of Something. Or, Maybe Not. 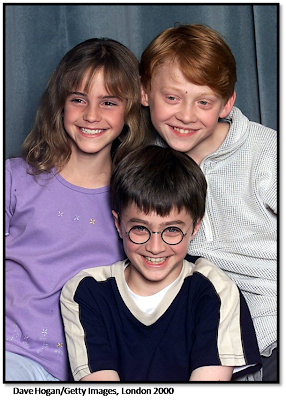 Is it just me, or does this feel weirdly like looking back at a picture from your childhood, too??

Ah, the Potter thing. Remember when the big buzz was about this "welfare mother" - or, to put it in Britishese, this "desperate Mum on the dole" -- who'd written a book, which just barely saved her from Certain Ruin? (Which would be what, exactly?) Remember the book challenges (ongoing), concerned parents discussing fantasy, arguments on "normalizing" witchcraft, defensive teachers, hysterical sermons from ministers who'd never read the books? That's the late 90's Harry Potter legacy I remember most.

I also remember reading the first book, and realized that none of that was the point.

More than anything, I wanted to write a book like the first book of the Potter series. Not necessarily fantasy, or about a hero's journey, or anything like that -- no. I more wanted to write a novel where there were six new things per page, where there were high emotional stakes and detailed mental challenges. I wanted to write characters with much to discover, much to win, and much to lose. When I read the first HP, I was transported into a world not my own - my disbelief so suspended that I could and did gulp the whole thing down in one breathless sitting, and think, "why did I wait so long to read this?"

I'm waiting to feel that again. I'm eager for the next Theodosia, the next Gilda Joyce, the next Sorcery and Celia, and the next book of deep fantasy which takes me out of myself, and into a new world. And, perhaps like you, I'm waiting with interest for the next Rowling.

Keep writing, writers; we are all eager for the next books which will hijack our imaginations. And cheers to you, Jo Rowling, for making such an impression on our (extended) childhoods.
Posted by tanita✿davis at 3:57 AM
Labels: Dear Author, Random Notes and Errata

And it was quite an impression.

I can hardly believe how young they were, looking back at that picture!

"I wanted to write characters with much to discover, much to win, and much to lose." I love this. Ditto.

And, I was just thinking about Gilda Joyce recently because while I was away in the D.C. area, somebody strongly recommended the Spy Museum! (It featured heavily in Gilda Joyce: The Dead Drop.)