While this book isn't marketed specifically to YA audiences, the main characters are in their very early twenties, fresh out of wizarding school.

If you're a fan of Terry Pratchett's Rincewind character, or ever wondered about life post-Hogwarth's for those not especially exceptional teen characters after graduation, this is one version of What Happened Next...

Reader Gut Reaction: I was entertained from the very first page of this book. K.E. Mills - or Karen Miller, when she's not writing under a pseudonym - has a light, amusing touch when dealing with her characters, and writes well about the hapless, less than attractive, and less than exceptional. And somehow, she makes them not only endearingly awkward and relatable, but through the darkness of their experiences, she give them bona fides and makes them worthy and real.

The minute I finished this novel, I went out and reserved everything else she's written. (And yes, thank you, FCC, the library is where I found this book.) 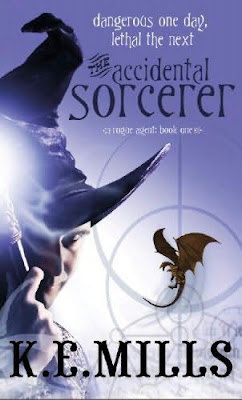 Concerning Character: Gerald Dunwoody is a wizard... which is really all that can be said. He's not an exceptional wizard. Not a wizard with a special scar or suprerme powers or a nemesis in the version of He Who Must Not Be Named. He's the type of wizard who inspires mild contempt and bullying, not lifelong antipathy. He doesn't have a whole lot of friends, but, it can also be said, neither does he have a whole lot of enemies. He's just a basic skills sort of wizard who got a Grade Three certification and makes sure that everyone else follows The Rules. It's a sucky job, as most first jobs are, but it's money for his tiny studio apartment and canned bean meals.

Aaaand, then one day, even that goes belly up. Spectacularly.

It's just another fine mess in the life of Gerald Dunwoody.

He answers a dicey ad for court wizard for a backwater kingdom called New Ottosland, and thinks he can wait out the cloud of failure he's been under. But this temp job turns out to be ...not quite as advertised. For one thing, the backwater king isn't just the vain boytoy he seemed -- he's a lot more astute. Terrifyingly astute. For another, Gerald thought he'd seen the failure before? Now he's facing a troubled prime minister/imperiled princess, a centuries old contract being breeched, a kingdom on the brink of war, and an international magical incident.

Gerald has to save the world, and prove his worth to himself, if no one else. But, how do unexceptional wizards do that?

Recommended for Fans Of...: Standard Hero Behavior, by John David Anderson -- this is essentially an older-guy version of the same novel, only without the long trip to find a missing parents. Oh, and with those bloodthirsty butterflies. And a bit more darkness and dreadful consequences, since it's not for middle grade. 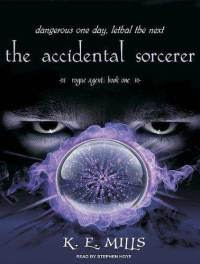 Themes & Things: The Hero's Journey has nine hundred million permutations -- and The Accidental Sorcerer, of course, shows yet another one, and one of the more successful. Gerald has to combat his own mediocrity, timidity, and belief about himself and his place in the world in comparison to others in order to succeed. He has to learn what it is to truly, wretchedly, and completely fail - and he also has to clean up his own colossal mistakes, and learn to rely on himself, and forgive himself. Those are some hard lesson to learn - and Gerald's on an accelerated course. However, this is book one of a series - he might have a lot to learn, but the author is giving him more time in which to learn it.

You can find THE ACCIDENTAL SORCERER, in hardback, paperback, or with its scary audio book cover, at an independent bookstore near you!
Posted by tanita✿davis at 2:39 PM
Labels: Fantasy/Sci-Fi, Guy Appeal, Reviews

Cool! This one has been on my tbr list for several years--so long that I had forgotten why, or when, or wherefor...

I am very pleased to be reminded that I do indeed want to read it!

Sounds like a fun series. Thanks for mentioning it.

Hope you both get a chance to read this one -- good fun.

It does sound like fun. Love the premise. Sadly, our library doesn't have it...