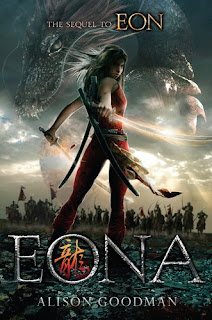 I acquired an Advance Review Copy of this book from the publisher at ALA in January. This review is based on that version. The hardcover version is out now.

Reader Gut Reaction: Eona: The Last Dragoneye is a worthy sequel to Eon: Dragoneye Reborn (reviewed here), and ultimately wraps up the story with a very satisfying and also somewhat surprising ending. Be warned, though: this is an epic tale, and as such, it is LONG. Fans of high fantasy will enjoy being plunged into this absorbing adventure and taken along for the ride. Despite some moments where I felt the pacing slowed a bit for me, I enjoyed watching Eona learn to use and control her newfound dragon power, and struggle with those who want to use her abilities for their own political and personal ends.

Concerning Character: This is an epic story with an appropriately sweeping cast of characters, but the author does an excellent job of developing and distinguishing the important personages and not letting the sheer number of people get out of hand. I was happy to see some favorite characters from the first book return and reprise their roles, often with a new twist—Lady Dela, the Contraire and Eona's loyal friend; Lord Ido, with whom Eona has a disturbingly strong attraction-repulsion dynamic; Kygo, the rightful heir to the throne. However—and I felt this way about the first book—I couldn't help feeling a bit distant from some of the characters, including the narrator, Eona, despite the story being told in first person. I can't put my finger on exactly why. It could just be a matter of taste, but I felt it might be because the society depicted in Eon and Eona is so bound by tradition and social stricture that it was difficult to relate to the motivations of the characters sometimes. On the other hand, that's a testament to how well the author has developed her world and the people who inhabit it.

Recommended for Fans Of...: Fantasy with Asian influences and strong female protagonists, like Cindy Pon's Silver Phoenix and Malinda Lo's Ash and Huntress. Books in which characters bond with dragons, like Anne McCaffrey's Dragonriders books.

Themes & Things: Eona struggles to make some thorny, convoluted, difficult moral decisions in this volume of the story—what is more important, friendship or power? Can you trust someone when they haven't been entirely truthful with you, and can/should they extend the same trust? Should you sacrifice one person's life to save countless others? Eona—and the reader—are shown that regardless of the ultimate decision, each choice has a cost, and sometimes the cost seems unbearable, even if you feel you've done the right thing.

Authorial Asides: Although I love the depiction of the swashbuckling girl on the cover, I'm debating with myself whether this is an example of coverfail...after all, this is an Asian-inspired setting, and the girl on the cover looks...I don't know. She's a brunette, at least. But not particularly Asian.

You can find Eona at an independent bookstore near you!
Posted by Sarah Stevenson at 8:00 AM
Labels: Adventure, AF, Fantasy/Sci-Fi, Multicultural Fiction, Reviews, Romance