I acquired an Advance Review Copy of this book from the publisher at ALA in January. This review is based on that version. The hardcover version is out now. 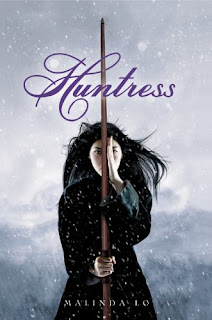 Reader Gut Reaction: I enjoyed Malinda Lo's earlier fantasy novel Ash, so I was really looking forward to reading Huntress and seeing where the author would go next. In this case, it felt like a prequel that really allowed her (and the reader) to explore the setting in much more intimate detail. And that had been my main quibble with Ash--I wanted a more fleshed-out glimpse of both characters and setting, and with Huntress, I was happy to find it was provided in spades. I really like it when authors can put a new twist on high fantasy, and the Asian influences on the setting and cultures in this book make it stand out. The unique details really help draw in even the more jaded fantasy reader such as (ahem) myself.

Concerning Character: I was a little surprised at first by the omniscient viewpoint that lets us get a glimpse of all three main characters—Kaede, Taisin, and Con. It was a very close third person whenever we were in each character's head, but the different viewpoints weren't kept apart in separate chapters the way many books with multiple POV do it. Rather, it felt more like traditional storytelling, letting us see Kaede and her growing sense of herself as a protector and hunter responsible for their party; Taisin's growing magical power and her fears of loving (and losing (Kaede); and Con and his care for both girls as well as his unexpected love for his guardswoman Shae. Once I got more accustomed to the style, though, I thought it worked well, and gave the story a classic fairy-tale feel.

Recommended for Fans Of...: Fantasy with an Asian-mythology twist, like Cindy Pon's Silver Phoenix and Alison Goodman's EON: Dragoneye Reborn. Fairy-tale retellings with a dose of romance, like Robin McKinley's Beauty.

Themes & Things: This is a sweet, poignant, hopeful love story as well as an intriguing fantasy adventure. The romance is not limited to the two girls, Kaede and Taisin, and their growing feelings for one another—in a world where same-sex relationships do not necessarily seem to be viewed with negativity—but also includes their friend Con and his love for Shae...a nobleman in love with a humble guardswoman. So there are themes of both gender and class at work here, but neither theme is overemphasized as such. And I liked not being beaten over the head with issues. It's simply a good story.

Authorial Asides: You can check out Malinda Lo on her blog/website and on Twitter, as well as on the fabulous site Diversity in YA Fiction, which she co-created with YA fantasy author Cindy Pon.

You can find Huntress at an independent bookstore near you!
Posted by Sarah Stevenson at 8:10 AM
Labels: AF, Class and Identity in YA literature, Fantasy/Sci-Fi, LGBTQ, Multicultural Fiction, Reviews, Romance

That is just the most beeeeeauyutiful cover, on top of all the other cool.

Isn't that a great cover? No coverfail here! :)