I acquired an Advance Review Copy of this book from the publisher at ALA in January. This review is based on that version. The official version is out now. 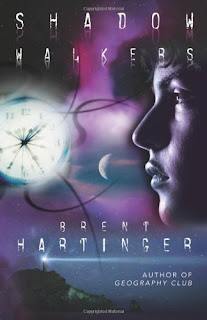 Reader Gut Reaction: Right away, I was happy to see a supernatural suspense novel with a gay teen character in which the protagonist's sexual orientation was neither treated as a social "issue" nor seemed to be a source of undue psychological stress on the character. Zach is lonely, yes, but mostly as a factor of living with his grandparents on a really small island off the coast of Washington state. His parents are dead, and he's only got his grandparents and little brother...and an interesting array of internet friends, who he's recently been forbidden to contact. So when Zach discovers a book about astral projection, he figures it might give him a way off the island, a means of escape. Soon enough, though, he discovers that astral projection has its dark side...and that he's not alone in the astral realm.

Concerning Character: Zach is a really likeable guy. I felt for him being one of very few teenagers (and even fewer gay teenagers) on the island where he lives, and I loved the depiction of his relationship with his little brother Gilbert. He's pretty much a regular kid, but desperately lonely. So when he meets Emory, his potential astral love interest, I wanted to cheer for sure. The characters are quickly drawn, but effectively, making this a fast and absorbing read rather than a study of character or an in-depth examination of what it's like to be a gay teen. As I mentioned, it's not an "issue book." But that's one of the things I liked about it. Not to beat it over the head, but we need many more books like this in which being a gay teen is treated as normal.

Recommended for Fans Of...: Lois Duncan's books about paranormal powers, especially those about astral projection like Stranger With My Face. Suspenseful books about battling mysterious dark creatures who live in the liminal spaces, like Scott Westerfeld's Midnighters trilogy.

Themes & Things: I'd say this book is more plot-driven, but one of the key themes is, of course, first love, and learning that it's what's inside a person's heart that's important, not what they look like or whether they're differently abled or gay or straight or what. Family bonds are also a big part of this book, and so is the idea of having the courage to do the right thing and to be your own person.

Authorial Asides: Brent Hartinger is a fellow Flux author and all-around nice guy. (And I'm not just saying that because it's in his bio. He really is.) He's also the author of Geography Club, Project Sweet Life, and a number of other books. You can visit his website and pick his brain on a number of writerly and non-writerly topics, and you can follow him on Twitter.

You can find Shadow Walkers at an independent bookstore near you!
Posted by Sarah Stevenson at 11:15 AM
Labels: AF, Fantasy/Sci-Fi, Guy Appeal, LGBTQ, Reviews, Romance, Suspense

Ooh, I like that cover.
And I also like SF with a gay character when it's not an Issue. Yay!

And I got a good snicker out of the fact that the author put that he was an all-around nice guy in his own bio. Modest!

Hartinger came to one of the first Teen Book Festivals here in Rochester, and he had this really funny presentation he did where he made a "PowerPoint" with stick figures on sheets of paper and had one of the teens stand up front and act in place of the computer. He talked about his long path to publication--it was inspiring and hilarious. I've been a big fan of his ever since.

I got the opportunity to meet and talk to him a bit at ALA. Definitely a character and a nice guy.

Way behind my self-googling, so only coming up this now. Thanks Sarah! And it was wonderful meeting you couple of months ago. I've since spoken to three people about you and/or your books, and everyone loves you. :-)