I greet you today with joy, fellow-readers! Cold Magic by Kate Elliott is the book I have to share with you, and though it's not marketed as a YA novel, it crosses over beautifully. The main characters are a pair of cousins who are below their majority (20 years old) and are still in school and ruled by the adults around them. You will love them. No, really...

Reader Gut Reaction: At first, I thought, Okay, a sisters/cousin novel, a school story, maybe kinda steampunk, what with the airships and carriages going on. But then: Magical (severed) heads! Kena’ani (or Phoenician) spies! Family secrets! Missing journals, a surprise -- shock! -- marriage, spirit world dragons, and saber-toothed tigers(!!!!)! Intelligent trolls! Revolution! Running for your life! Romance! WOW. This novel was way more than I expected, when I looked at the cover. It was an adventure, a mystery, a deeply textured, detailed, labyrinthine path that the author encourages us to follow with little hints and treats along the way. I sat down to read this in one sitting and emerged, blinking, and a little despairing that the sequel isn't going to be out until later this Spring.

Cold Magic is set in an alternative Europe peopled by various Celtic and African tribal groups who were defeated by the Romans -- but outlasted its fall, pulled together, and created a new world. For those of you who like your steampunk fantasy epic, your history alternative, your adventures dangerous, your female characters intrepid and varicultured, this is for you. 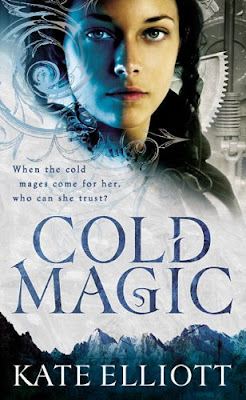 Concerning Character: Speaking of intrepid females, you'll enjoy Catherine Hassi Barahal - a woman nearing her majority - the legal age of reason - almost ready to leave school, but still sneaking into her Uncle's library and reading all she can of her father's journals. She has a best friend and snarky cousin in Beatrice, with whom she's lived since she was orphaned as a small child. Cat is fairly clear-eyed -- she knows doesn't have Bee's shockingly good looks, and fortunately not her huge crushes that change every five minutes, but the girls are loyal to each other like no one else -- which turns out to be a good thing, when everything Cat thought she knew about herself and her place in the family turns upside down. A Cold Mage comes to call one night, and her whole life changes...

Recommended for Fans Of...: Those who loved Hilari Bell's A Matter of Profit will get the same kind of worldbuilding feel in this. Ursula LeGuin's Earthsea fans will also feel a similar twinge of homecoming.

YES. I did invoke The LeGuin. To me, it was that good.

Themes & Things: Family loyalty is a large part of the novel. Believing that no matter who you come from, you must be who you are is an oft-repeated theme, and this truth affects each of the main characters. The sort of epic nature of the novel comes across like a hero's journey: we have a girl who thought she knew most of who she was, but was searching for her identity through her father's writings -- and then, her place in the world crumbles. She has to seek an identity from the ground up, and fully inhabit the person she was born to be. 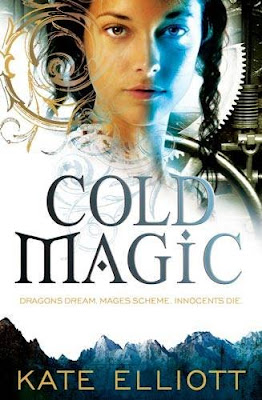 (Could I be any more cryptic, mystical and esoteric?? Actually, yes, I could. But, read the book and avoid that, okay?)

Authorial Asides: The wealth of the African culture is its storytelling. Mix that up with Celtic culture of bards and lays, and you have tales for days. The various cultural traditions from both worlds are given equal weight in this novel - and though there is a LOT stuffed into this novel, the layering is faultless, and the storyline is nuanced. It's the first in a triumvirate (I believe - Cold Fire & Cold Steel forthcoming), but I didn't get the feeling that the author rushed to pack everything in -- nor did I come to the close of this novel feeling like I was at a cliffhanger. It was finished - but the story is definitely not done.

And a word about the cover: We have Afro-Celt characters in this novel. There may be some discussion whether or not or to what degree the cover reflects this biracial mix, but I think the more ...interesting thing is that the mass market cover (the first cover pictured, in bluish tones) is so subtly different from the original cover of the book. Cat becomes more of a typical romantic heroine - with a more made-up face and less of a look of a young survivor. Cover people constantly baffle me... I like the original better, and I think they've skewed more toward making her look more typically European on the paperback cover - which is too bad.

Those of you seeking romance, it's a very minor storyline, but it's minor like a vein of gold is "minor" in a mountain of quartz. It's there. You'll see it. It's worth the effort.

I'm gushing, aren't I? Fine, fine. One last thing: Kate Elliott lives in Hawaii. I think this is why she has such awesome writing chops. I may need to move to a tropical island.

You can find COLD MAGIC (Book 1 of the Spiritwalker Trilogy) at an independent bookstore near you!

1) fall clearly into the YA category

5) in which the teen protagonist(s) has (have) consensual and non regretted sex that does not involve getting married first (as it does in Twilight).

I am having a SQUEE moment, because perhaps this question means that she is going to write more YA-type of tales!!!! Give the question a think, and go give her an answer.
Posted by tanita✿davis at 4:24 AM
Labels: Adventure, Ethnicity and YA Literature, Fantasy/Sci-Fi, Reviews, Sisters, Steampunk

Wow, sounds REALLY good! Maybe even a little Philip-Pullman-esque. I'll definitely have to read it.

Hmmmm....I almost really liked this one lots, but didn't, quite. For instance, here's what I said about the romance: "I do not like "He just tried to kill me! Yet how I want to kiss him!" in my fictional relationships."

I did like the alternate world very much though! This one is right next to Bone and Jewel Creatures, by Elizabeth Bear in my multicultural book list--have you read that one yet?

Oh, that's not fodder for romantic feelings, truly....but I'm still willing to try it out. I haven't read the Elizabeth Bear books yet, myself, but dang it, now you've made my TBR list even longer!!

Charlotte, I'm the first one to become annoyed at Relationships of Stupidity, but I felt like she was only thinking he was hawt. Sadly, hormones exist without filters such as thoughts of "Hey, he tried to kill me!!" And by the time she actually made a millimeter of a move toward thinking of acting on anything, he was well past trying to kill her. That saved her sanity for me, that, and they don't ride off into the sunset.

And no on the Bone & Jewel Creatures; I really like the sound of that. I'd like to be made of bone and jewels, please!

It was probably just my mood...or perhaps I have a thing against jaws per se, and if it had been his eyes, I would have felt otherwise....