Jazz in Love by Neesha Meminger 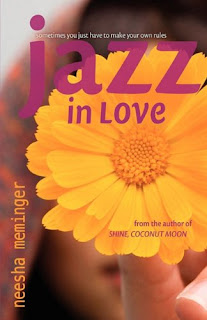 I received a review copy of this book from the author.

Reader Gut Reaction: When one of the quotations kicking off a book is by Lisa Simpson, I already feel positively disposed toward it—and I was already excited to read another book by Neesha Meminger, author of Shine, Coconut Moon, which I loved (reviewed here). I'm always interested in stories that address what it means to live the second-generation, children-of-immigrants life. Jazz in Love does that with a premise sure to hook not only South Asian readers but any young reader with strict parents, especially those who go a little overboard with respect to controlling their child's social life.

Because my dad is South Asian, I related A LOT to the narrator, Jazz (short for Jasbir), whose Indian parents are petrified that any opposite-sex contact that's not strictly related to school will automatically lead down a road of delinquency, immodesty, and embarrassment to the family. But, unlike Jazz, I did not have to embark on the Guided Dating Plan—a series of matchmaking "dates" with parentally-approved nice and upwardly mobile Indian boys. It's a step removed from arranged marriage, and Jazz is NOT happy. Even a whiff of arranged marriage—in our day and age, in the United States--is enough of a hook to keep readers absorbed from the beginning, even if it's from an outside-looking-in perspective.

Concerning Character: Jazz is very easy to relate to, especially for someone like me who was definitely the "good girl" during high school. She might have strict parents, but she's got the same longings that other girls have. What's more, she also wants to be able to talk to her guy friends without having to be grilled time and again by her parents—something that's not a problem for her school friends. Even Jeevan ("Jeeves"), a guy she's known since they were kids, is borderline off-limits--despite being Indian, he's not the right kind of Indian. There was a realistic and appealing range of characters in this book, from Jazz's best friend Cindy to potential marriage candidate Mit, who's got his own reasons for not being into the idea of matchmaking.

Recommended for Fans Of...: Stories like Skunk Girl by Sheba Karim or 1001 Cranes by Naomi Hirahara, featuring characters trying to balance their parents' wishes and values with their own; also, fans of books where there's a decision to be made between the good boy and the bad boy, and the bad boy doesn't end up quite as appealing as he originally might have seemed.

Themes & Things:The subtleties and complexity of what it means to be Indian are nicely dealt with here—all the characters are individuals, and there's a range of different South Asian subcultures introduced, along with the fact (which may be new to some) that those groups don't always seamlessly mesh with one another. I also loved the balancing act created by Jazz wanting to please her parents but, at the same time, wanting to follow her heart and not always wanting to stick to her parents' traditional values. That really rang true, and it's something a lot of readers will relate to regardless of cultural background. Lastly, the theme of finding love and friendship in unexpected places is always a good one. It permeates the story, as the concept of "love marriage" runs up against the traditions of matchmaking and arranged marriage, and Jazz (and her family) discover that neither approach precludes finding true love.

Authorial Asides: I firmly believe we need more stories like this, not because I feel that teen readers need to be educated, but because there are readers like I used to be who really NEED them—readers who want to see themselves in stories and see that they aren't the only ones questioning, testing, discovering what it means to be between cultures. Also important is the idea that culture is THERE, but it's not all that defines a character or a story, and it's not something exotic to be gawked at. It's simply part of the myriad of different stories out there to be told.

You can find Jazz in Love at an independent bookstore near you!
Posted by Sarah Stevenson at 3:05 PM
Labels: AF, Multicultural Fiction, Realistic Fiction, Reviews

I really liked Shine, Coconut Moon and will definitely put this on my list!

"Also important is the idea that culture is THERE, but it's not all that defines a character or a story, and it's not something exotic to be gawked at. It's simply part of the myriad of different stories out there to be told."

Yes, yes and yes to all this. Especially about how culture is simply woven into the story. I love that Neesha showed that South Asians are not a monotholic group (I hope that's the right word, gosh-darn SAT prep). I would pair this book with Skunk Girl too, although poor Nina had a great sense of humor to help her deal with balancing parents and boys/friends :)

I need a sequel.