My inbox is filled, on a daily basis, with projections and prognostications from Publishers Weekly and various other book related people, about the future of publishing, the future of libraries, the future of bookstores, etc. Obviously, change is in the air, and how we read and purchase our reading material is evolving.

That evolution has affected the written word as well -- for a long time, email has taken the place of "snail mail," and now texting has obliterated email in terms of the quickest way to communicate.

But nothing makes "quick" necessarily better.

I love receiving letters, the people - older and younger - to whom I send letters and postcards always respond with such joy. Somehow, email and texts are for daily, ordinary messages that you have to send -- about groceries, rides, meetings, etc. But letters you get in the mail are most often about friendships, and those are things that you keep. (This is not to say CARDS that just have signatures on them count as anything near the same. But that's just my opinion.)

The postal services in the U.S. and the UK are hoping that people will embrace their inner Luddite, and keep writing letters. These stamps make a good case for doing so!

While the Archie stamp is just gorgeous, I love Calvin & Hobbes. I'm thinking they should do an ENTIRE stamp series of Calvin & Hobbes, messing around. (Imagine a series of Christmas stamps with The Snow People...) On the other hand, I could do without Garfield, ever.

Not to be outdone, the Royal Mail recently came out with "The Very Best of British" stamps -- British what, they never said, but one assumes it's British stories. Featured are two Pratchett stamps, which makes me happy, and the lovely depiction of Aslan from the Narnia tales, then the rest are movie stills -- the White Witch, Dumbledore and Voldemort, which make me somewhat less happy. I think artwork from the books would have been much better, but then, no one asked me.

(And, to whom would one send letters with Voldemort postage!?? Exes and bill-collectors, and other people you hope will die?? Just getting a card with that the noseless You Know Who as a stamp would send a message in and of itself.

ALSO: did anyone else think he just looked kind of ridiculous in the movie? He didn't "look" like that from my imagination of him from the book. Just sayin'.) 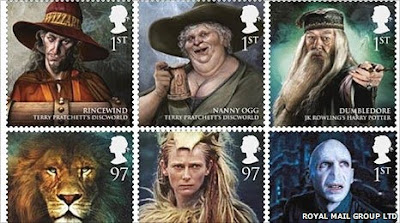 As quick-time communication devices flood the market, I think we'll see brighter and brighter postage stamps, with the idea that people can be enticed to write more letters. It will be interesting to see how that goes!

I'm always on the look-out for other book-related postage stamps, and have hopes for this new season of philately. I'm still bummed that the Very Hungry Caterpillar stamps from 2005, or the Where The Wild Things Are stamps from the same year were not widely available, but with the rise in children's books being made into films, we may see more stamps ( -- and I'll make a point of grabbing some this time). Of course, there's always vampires and zombies; no doubt, someone somewhere is making a Twilight postage stamps as we speak...

Happy Mailing!
Posted by tanita✿davis at 1:34 AM
Labels: Random Notes and Errata

When I lived in England, I wrote a lot of letters and LOVED their stamps. They did a Laura Ingalls Wilder issue once, and we had an artist friend who designed some botanical stamps. Just beautiful.

I've always bemoaned the "death" of snail mail letters, and want to get back to writing more of them this year. Part of what discourages people is the high cost of postage. I'm old enough to remember a first class letter only costing 5 cents.

I still have some Teddy Bear stamps, an Elvis stamp, and some of the children's book illustrator stamps that came out awhile ago.

OMG! I would LOVE to get mail with Voldemort or Dumbledore on it. Seriously!

*capers about, wishing the US had awesome Harry Potter stamps*

"And, to whom would one send letters with Voldemort postage!?? Exes and bill-collectors, and other people you hope will die??"

Still laughing over this one!

I still write old-fashioned letters, as well as a lot of e-mail, and I love matching the stamps to the recipient. I totally agree with you on Calvin and Hobbes vs Garfield. I had to use Garfield for a bill - that's where all the ugly stamps get used. By the way, the series that had The Very Hungry Caterpillar and a Wild Thing also had six other children's book characters, including Maisie Mouse, who's certainly a "Best of British [something]".

Jama, I have six stamps from a Wild West series that I hope to put in shadowboxes someday... are you framing your collection? Your house is so filled with goodies I missed them, if you have.

Kel - I'm going to see if I can send you a sheet of the other stamps, so you can frame them. Our local PO didn't have them - you have to SEARCH!! Or order them, I guess...

How much do I LOVE those cartoon stamps? Even Garfield. (You have no idea how obsessively I drew Garfield and Odie repeatedly as a child. This was during my "wanting to be a cartoonist" stage, which actually lasted a really long time and never completely went away...)

Yeah, I'm not sure what I would think if someone sent me mail with a Voldemort stamp on it. That does send kind of a weird message.