Today, gentle readers, is Thursday. For quite a while here at Finding Wonderland, Thursday has simply been, well, Thursday. The day after Wednesday and before Friday. Nothing special.

Oh, but it used to be. Thursday used to be special, and it will be again. I used to do a little something called Toon Thursday, in which I posted a cartoon (usually writing- or blogging-related) just for fun, for a change of pace, to amuse the two of us in our ongoing writing endeavors--and hopefully amusing a few others along the way. The poets had Poetry Friday, and, not being much of a poet myself, I was, I admit, a bit jealous. So I started up Toon Thursday.

For a variety of reasons, I stopped posting the 'toons. But for a while now, I've been thinking about starting up again. Probably not weekly like I was doing before--that was pretty ambitious--but maybe twice a month. And I'm excited about it. In preparation, I've put together an archive of every Toon Thursday I've drawn so far, sorted alphabetically by title, which I'll update as I continue drawing cartoons.

In honor of re-starting Toon Thursday--next week, if all goes according to plan--here's a reprint of the first cartoon I ever posted. Enjoy! 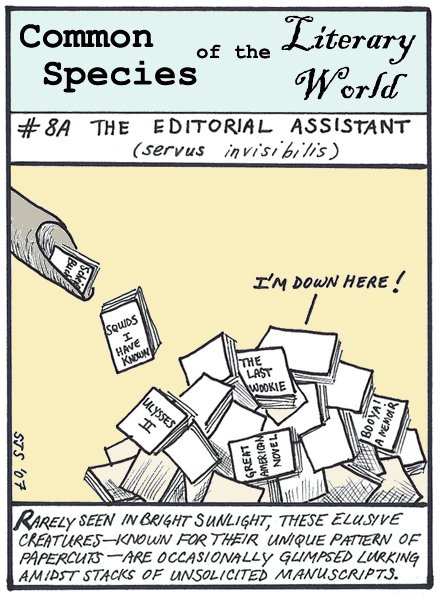 I always love your toons, Sarah.

Thanks! I'll look forward to more.

Missing you both at ALA...

I almost wish I could read, "Squids I Have Known." Almost.

I was really hoping someone would read the book titles.

Personally, I think I would like to title my memoir "Booya!" (Should I ever write one...)