Parts of these reviews were initially posted to Goodreads. (Yes, I'm plagiarizing myself.) And--this kicks off a new format for writing reviews here at Finding Wonderland. We're trying to be a bit more focused, a bit more distinctive...and hopefully a bit more interesting as a result! 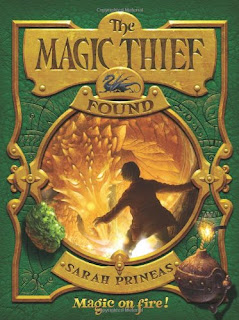 Reader Gut Reaction: I've really enjoyed all three of the Magic Thief books, and the third book didn't disappoint. In fact, I was pleased that this volume held some new and fun surprises. I haven't been keeping up with the sections written in code, but I haven't found them to be essential to the story, so I think I'll be OK there. Readers who are big code fans will no doubt enjoy it—my childhood self would have probably loved it. (I spent ages making bookmark "cheat sheets" of both the runic and elven alphabets in the Lord of the Rings books.)

Concerning Character: What continues to impress me about this series is the author's ability to convey so much atmosphere and feeling through a very laconic narrator. At the same time, Conn is very likable, stubbornly doing what he knows is right even when very few people seem to be on his side. All of the major side characters are nicely fleshed out and 3-dimensional. Okay, sure, there are a few faceless interchangeable thugs, but they aren't critical to the story. It's characters like the wizard Nevery—so much more prickly yet relatable than the very distant-seeming Dumbledore—and his knitting, biscuit-baking housekeeper/bodyguard/manservant Benet, and the tough, no-nonsense Duchess-to-be Rowan, that lend uniqueness to what could be just another fantasy adventure about a would-be wizard.

Recommended for Fans Of: I've already kind of hinted at it, so I might as well say it: fans of Harry Potter or Lord of the Rings-style epic fantasy adventures might well enjoy these, especially if you're looking for a quicker read. They'd also be great in the hands of readers who aren't quite ready for those two series. I think Tamora Pierce fans would also dig these—there are some similarities in the world-building and in how the characters relate to the world's magic.

Buy The Magic Thief: Found from an independent bookstore near you! 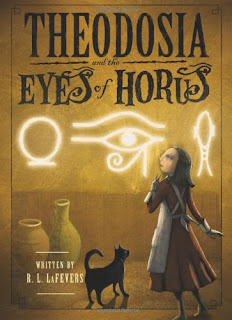 Theodosia and the Eyes of Horus by R.L. LaFevers

Reader Gut Reaction: Another enjoyable installment from a series that is truly charming, appealing, fun and adventuresome. Don't expect the books to stick perfectly to historical accuracy—that's not the point. Just know that you'll be following a plucky and determined heroine whose agenda of saving the world from ancient curses does not necessarily align with her parents' more prosaic museum-managing duties. The latest adventure finds Theodosia encountering a mysterious Egyptian magician while trying to avoid the usual crop of nefarious enemies.

Concerning Character: Theodosia continues to exhibit the sort of spunk and sense of adventure we expect from her, and she continues to face an assortment of threatening baddies and unexpected setbacks in her latest adventure. Fortunately, she's got a rather interesting collection of allies to help her along the way. Most exciting, though, about this book were the revelations and hints about who Theodosia is and why she ended up with her curse-detecting powers. (That's all I'm going to say about that!)

Other Writerly Thoughts: I loved the setup of having Theodosia come up against her mentor, Wigmere, who is being aggravatingly adult and bureaucratic about the whole thing. For one thing, he's sidetracked by the fact that Theo is an eleven-year-old girl, forgetting that she's no ordinary girl but somewhat of a genius with rather unusual abilities. I was just waiting and waiting for Wigmere to get his comeuppance at the end and to see Theo proved right after all, and I was so NOT disappointed. Sweet vindication! It's a thematic device that a lot of successful classic children's books employ, and it's used to good effect here.

Recommended for Fans Of: If you enjoy Egyptology, secret societies, and Victorian/Edwardian settings, and you like mysteries, this is a fun series. Fans of Joan Aiken's Wolves books, Frances Hodgson Burnett, and other children's classics featuring strong girl heroines may enjoy these. If you like edgy-but-heartwarming children's fantasy like Neil Gaiman's The Graveyard Book, this might also appeal.

Buy Theodosia and the Eyes of Horus from an independent bookstore near you!
Posted by Sarah Stevenson at 3:12 PM
Labels: Adventure, AF, Fantasy/Sci-Fi, Middle Grade, Reviews

I love the Theodosia series.

Totally off topic but I saw Latte Rebellion in the store today. Congratulations.

Yay--thanks, Doret, for the congrats. I'm so glad it's showing up in stores and libraries.

And I love the Theodosia series, too. I know I would have adored it as a kid.

I have not read either of these series, but your wonderful reviews make me think I am definitely missing out. Thanks, I will have to check both of these out!