A First-Timer's ALA Recap 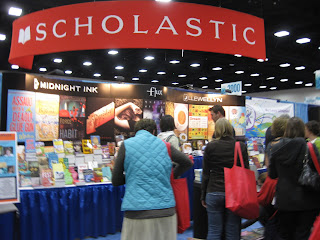 It's hard to describe such an overwhelming experience (to an introvert like me) of the bookish extravaganza that is the American Library Association Midwinter Meeting, so I'm going to take a page from CazzyLibrarian (whom I met this past weekend) and stick to a few key highlights.


The YA Blogger Meetup:
Courtesy of Stacked and Baen Books came Friday night's YA blogger/author meet-and-greet mingle-tastic event. Among the fab bloggers I talked to (NOT an exhaustive list! I know I've forgotten some--apologies) were Sarah of Green Bean Teen Queen, Bookalicious Pam, Kelly Jensen, Liz B, Melissa Wiley of Here in the Bonny Glen (who I'd met in person at Kidlitcon 2010), and Kelly Metzger of The Cazzy Files. I had a lot of fun talking to Flux publicity director Steven and fellow Flux author Rebecca Fjelland Davis (who wrote Chasing Alliecat—which is now on my TBR pile), both of whom I'd met at the Kidlitcon. 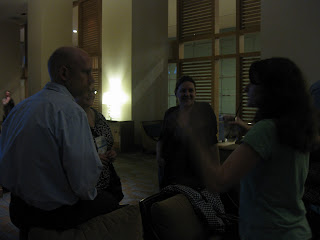 One of the most memorable moments of the evening was discussing the merits of Mockingjay as a conclusion to the Hunger Games trilogy with CazzyLibrarian, Melissa Wiley, author Brent Hartinger, and one other person I didn't formally meet and therefore, with apologies, cannot name. I even sneaked in the opportunity to meet Mitali Perkins by attending the first half-hour of the USBBY meeting where she was scheduled to speak before scooting off to the blogger event. I have to say, though—it was weird being there in my "authorial capacity" and not having any way to say "Hey! I'm a blogger, too!" Plus my name tag rather deceptively claimed that I worked for Flux and was from St. Paul, MN. 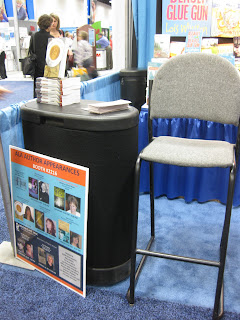 My First-Ever Book Signing:
I don't want to overplay this, as it was mainly a blur and went by surprisingly quickly. But I felt it was notable enough to mention—especially since I ended up meeting a couple of really awesome writers I'd been hoping to talk to in person: Cindy Pon (Silver Phoenix, Fury of the Phoenix) and Robin "R.L." LaFevers (the Theodosia books). So many of the wonderful fellow bloggers I talked to the previous night came, too. I'm really grateful to everyone who stopped by, and I'm especially grateful to the folks at Flux and Llewellyn who set it up, manned the booth and kept me company when the signing line died down. And my mom and stepdad made it, which was fantastic. I still felt sorta like maybe there were people who didn't assume that I was actually the author but instead some sort of nicely-dressed booth attendant, but oh well.

Flux Dinner:
Saturday night I went to dinner with Flux employees, including the fabulous acquisition editor, Brian Farrey, aforementioned publicity director Steven Pomije, and Llewellyn employee Eric and his wife Char, both lovely individuals; and other Flux authors: Brent Hartinger, Becky Fjelland Davis, Ann Finnan and Linda Joy Singleton. We went to a restaurant called the Hash House A Go Go, prompting me to wonder whether the suffix "A Go Go" automatically makes a restaurant good. (I mean, Crepes A Go Go in Berkeley is good. And what does A Go Go mean, anyway? This, perhaps?)

The portions were certainly ginormous. Chicken and waffles (which I did not personally order) included three or four waffles, a couple of chicken breasts, and, I'm told, the waffles were stuffed with bacon. (In case anyone was wondering, I had a very nice, also large, house salad with creamy cucumber dressing, and a bowl of wild boar chili, which was not bad but a bit salty. Sorry. I'm food-obsessed.) I feel like such a lucky duck, working with Flux. I really do. Everyone is so nice, and professionally and socially the whole process has been a pleasure. Hard work, but still. FAB. 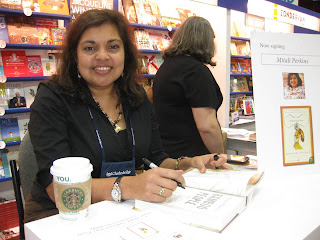 I did a very pathetic job of taking pictures, mostly because the experience was such a whirlwind and my introverted little self was kind of overwhelmed, but it was also exhilarating to be around so many "book people" and, of course, so many BOOKS. I was lucky—speaking as a blogger, now—to pick up numerous awesome books and ARCs (and sequels!!). Some of the most exciting were:

And much, much more! Well, not maybe not two "muches" worth. But definitely a handful more. I also had lunch with Adrienne, which I'd been looking forward to for ages because we last saw each other way back at the Portland Kidlitcon in 2008; I spent a lot of time walking around downtown San Diego (partly because I was mysteriously housed in a different hotel from the rest of the Flux people); and I even met some random Cybils judges, like the aforementioned Kelly Jensen and the very sweet Rene Colato Lainez.

What a weekend. But, because I'm me, I'm EXTREMELY glad to be home, too.
Posted by Sarah Stevenson at 8:00 AM
Labels: AF, Book News, Happenings, Views

Sarah, I took very few pictures too. My phone has some, but I don't feel brave enough to pull out my camera. Oh well. I didn't realize Libba Bray has a new novel either! Thanks for passing it on!

Loved your food descriptions :) I've only had boar on a couple of occasions, and it is always yummy.

Only if you saw women in tall white boots at your hash restaurant does A Go Go mean go-go...

It looks like it was really crazy, busy, chaotic, and overwhelming -- and fun. I think I will bring tape to FIX my name tag if I ever go to an ALA event again; the whole "I'm from NY and work for Random House" got me some really DIRTY looks when I went over to formally meet an editor from a very small independent house who had emailed me some months back. Her boss thought I was trying to poach her, and he practically bumped chests with me. It was a very New York crime family moment...!

Hey miss! It was great getting to meet you face-to-face, as well.

Also, did you see we featured you over on Shrinking Violets today? Front and center, celebrating your debut ALA signing!

Wait what!? You live in NorCal?

I'm still trying to process all the little bits and pieces of things I encountered at ALA. It's always wacky, but mostly the good kind of wacky. I'm glad it was a good experience for you, being a first-timer and all. :)