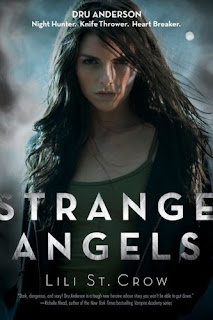 Let me start off by saying I was pretty sure I wasn't going to like this book. I'm at near-saturation for vampires and werewolves, and I never was that fond of zombies. But when the writing is this clever, the characters this real and likable, and the plot has so much non-stop action, even a premise I don't like can turn into a book that I, in fact, do.

Dru Anderson has spent much of her life moving around, following her father, who is a hunter of...things. Supernatural things with bad intentions. Like vampires and zombies and stuff. Imagine if Buffy was, instead of a perky teenage girl, actually a protective dad with an arsenal that would rival that of a small Central American nation. And then there's Dru, sixteen years old, with a sixth sense that her grandmother called "the touch"--for all the good it's done her, since her mother and grandmother are both dead.

And now, her dad's left for a mission, and hasn't come back. She's stuck in this snowy northern town that's nothing like the Southern states she's used to, and her only friend is a weird goth-y kid named Graves--who, to my delight, was depicted as half-Asian...and then, to my confusion, this fact was harped upon repeatedly, but I have to say, that's my only real complaint about the book. It has a reasonably fresh take on the whole hunter-of-supernatural-evils genre, and presents characters that inspire a lot of sympathy and intrigue. Its hidden strength, too, is that it depicts the process of coping with loneliness and loss with a great deal of sensitivity and depth. I'd say, if you liked Cassandra Clare's City of Bones books, or Holly Black's dark faerie tales, you might enjoy this one. And it's the first in a series.

Buy Strange Angels from an independent bookstore near you!
Posted by Sarah Stevenson at 2:11 PM
Labels: AF, Fantasy/Sci-Fi, Reviews, Suspense

Uh, yeah. Can I ask where Ms. St. Crow was GOING with the harping on the Asian thing? Okay, his eyes? Nicer than the "squinty" ones. ORLY? And on and on she went.

I expected Graves to have some martial arts moves or suddenly be able to write spells in a flowing calligraphy. I wanted to slap her.

But, otherwise, after a bit, yeah. Decent book.

Except for that strange harping on Graves, I actually really enjoyed this, much more than I'd thought--and was glad to see a part-Asian character, in any case, but jeez.