It looks like I'm mostly about the reading roundups lately. It just seems to suit me for now! I think I like to binge on books, moving decadently from one to the next without having to feel obligated to write them up. After all, it really is about the reading for me. 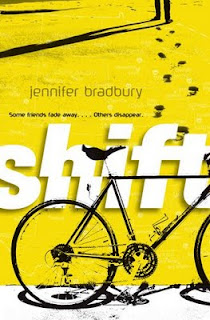 I went to the library, as usual, looking for new YA books that piqued my interest at the moment. I picked up Shift by Jennifer Bradbury, which I'd heard about from several sources, including Guys Lit Wire. The story is told in sections that alternate between present and past--a device that's accomplished fairly well in this debut novel, and successfully increases the tension. In the present, Chris Collins, the narrator, is just starting college after finishing up a cross-country bike trip with his best friend, Win. The story in the past, of course, concerns the bike trip itself—and what happened along the way. All we know is, at some point Chris and Win separated, and Win never came back. It's a mystery story, on one level, but it's also a tale of friendship, what happens when it ebbs, and what's left, as well as a story of how far someone might be willing to go to find themselves. 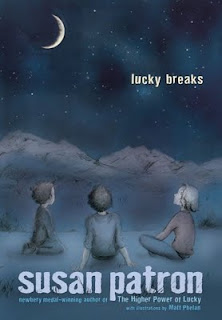 While at the library, I also wandered over to the new MG and children's literature revolving rack, and ended up checking out Susan Patron's Lucky Breaks, the sequel to The Higher Power of Lucky. Ultimately, I think I ended up being affected a bit more by the first novel, but this was absolutely a fitting sequel in any case. In this volume, Lucky, nearly 11, wishes more than anything that she had a real best friend—not Lincoln, who's a boy and who's obsessed with knot-tying; and not Miles, who may be a newly-recognized genius but is still only five. One day, a girl her own age shows up in remote Hard Pan along with her paleontologist uncle—Paloma. During their adventures together, Lucky learns what it means to have a best friend...as well as what it doesn't mean.

If that makes sense. 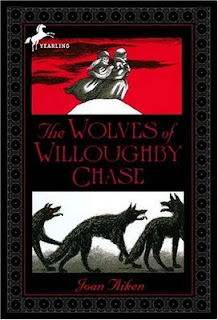 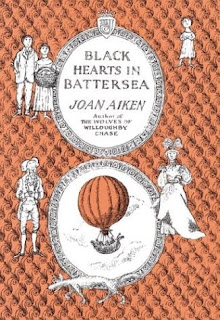 I also decided to pick up one of my old favorite books from when I was growing up—one that I haven't re-read until now: Joan Aiken's The Wolves of Willoughby Chase, as well as the sequel, Black Hearts in Battersea. Before there were the Baudelaire kids, there was Bonnie and Sylvia, and Simon the goose boy; and before there was Lemony Snicket there was Joan Aiken. If you were ever a fan of The Secret Garden, of tales of unlucky orphans who find themselves in dire and dismal straits but ultimately end up triumphant (unlike the poor Baudelaires), you can't miss these. Plus, there are the fabulous cover illustrations by Edward Gorey—the perfect choice, in my opinion. I'm looking forward to reading more books in the Wolves series, since I only ever read the first one as a child (and read it again, and again...).

"It really is about the reading." Ditto. And happy reading to you too.

I loved Wolves, but never found the momentum to read the sequels. Maybe it's time to try again.

This is terrible--I just realized I forgot two books I should have included in the roundup. Curses! That's what I get for having multiple book piles.