From New York to Italy, From Iraq to India

Before I start this latest roundup of reviews, I want to share a sort of odd conversation I had today with the grocery store checker, a guy I'd estimate to be in his early 20s. Conversation got around to books and reading, because I mentioned I was a writer, and at some point he said that he was lucky if he ran across a book that took him more than a few hours to read. He said he tended to "speed read," to skim long descriptive passages and read mostly for dialogue. I wasn't sure what to think of that. I mean, if you only ever read the dialogue in a book, does that mean you're looking more for the experience of the story, rather than reading to enjoy the writing itself? Speaking for myself, I only skim reading material if I'm zeroing in on facts/main points, or if I don't much care for the writing. But how many people don't even think on the level of the quality (and in this case I mean quality like timbre, perhaps) of the words and how they're put together on the page? Perhaps this explains the baffling popularity of things like The Da Vinci Code. (Sorry, but I really didn't like it.) And on that note, on to the reviews. 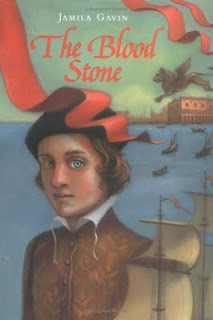 The Blood Stone by Jamila Gavin follows the Renaissance-era journey of twelve-year-old Filippo Veroneo, who, in order to save his family from the predation and blackmail of his greedy brother-in-law Bernardo Pagliarin, must undertake a dangerous trek over sea and land to ransom his father from far-off Kabul. Though I had some issues with the pacing of the story, historical fiction fans will greedily devour the details of life in the Italy, Near East, and South Asia of the past, and the magical qualities and sense of adventure will appeal to fantasy fans.

You may laugh if you like, but I couldn't bring myself to read Coe Booth's Tyrell during my usual before-bed reading time—I had to limit it to daytime, because it was so raw, such a punch to the gut, so real, that I found it hard to deal with the extreme amounts of liberal guilt it inspired and then fall peacefully asleep. 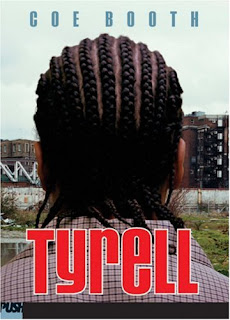 The story of Tyrell, a teenage boy in the Bronx whose family is living in emergency assistance housing that's full of roaches, who stopped going to school because he feels responsible for taking care of his family while his father is in jail, whose mother has no idea how to support the family on her own or even how to properly care for little Troy—it strikes me as a story that's probably a lot more common than any of us want to admit, a story of citizens, of human beings who are falling through the cracks of a system that doesn't quite know how to deal with them. But it's also a story of a guy trying to make the best of his life despite all that, who's at heart a good guy raised in a difficult environment. Booth doesn't sugarcoat things, but somehow throughout this tough tale, Tyrell—and, by proxy, the reader—maintains the hope of a better future. 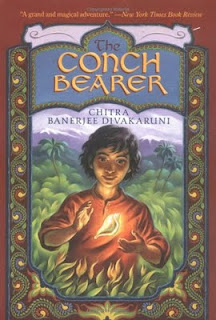 I'm a fan of Chitra Banerjee Divakaruni's adult fiction, so I was eager to read The Conch Bearer, the first in her series of novels for younger readers (I'd call it younger MG). Though I have to admit, having read it, that I prefer her adult books, I truly enjoyed reading an epic-level fantasy quest that took place entirely within an authentically South Asian context. Anand's journey from the Kolkata shack where his family lives to a wondrous haven high in the Himalayan mountains is fraught with danger at every turn, but he has pledged the mysterious old healer Abhaydatta that he will return a sacred and magical object—a conch shell—to its rightful home. There were times when events in the story felt a bit arbitrary to me, but on the other hand, it avoids some of the recycled fantasy tropes that crop up again and again in a lot of books in the genre. 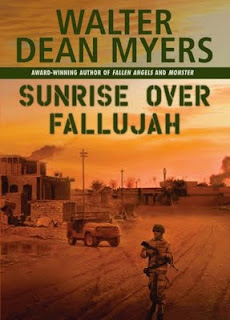 If you want an inside look at the harsh realities of a young soldier in the complex, nuanced, and often confusing wartime situations of today's world, check out Walter Dean Myers's Sunrise Over Fallujah. Robin "Birdy" Perry's father wanted him to go to college, but instead he decided to join the army, and as the story starts, the young Harlem recruit is just about to begin a tour in Iraq with his Civilian Affairs unit. Civilian Affairs has the job that official propaganda refers to as "winning hearts and minds"--they're sent out into the community to interact with the Iraqi people, reassuring them and thereby increasing stability in the region. Though Birdy—and the reader—start off feeling a bit distant from the reality of the situation, over time he comes to realize that the ravages of war aren't just affecting soldiers and civilians in a physical way, they're also affecting everyone inside, including him. Myers is skillful in gradually and subtly developing the different characters in Birdy's life, letting us get to know the other soldiers in his unit as if they were our compatriots, too. It's not a heavy-handed book, but it gets the point across that war is never simple, never easy, and you can be a brave, dutiful, effective, and patriotic member of the armed forces even if you're scared sh*tless and don't always feel good about what you're doing.
Posted by Sarah Stevenson at 10:27 PM
Labels: Adventure, AF, Fantasy/Sci-Fi, Guy Appeal, Middle Grade, Multicultural Fiction, Reviews

Tyrell and Sunrise Over Fallujah: pretty strong stuff there. I totally get what you mean by not being able to read certain books before bedtime, or any other "vulnerable" times.

Thanks for highlighting books that give me glimpses into the lives of cultures I don't know.

I found Tyrell to be an uncomfortable experience as well. A lot of Myers' books give me the same feeling -- interesting that the "kernel of hope" that YA people are almost required to write in can still work out in these tales.