Today one of my long-awaited library holds finally came in, and I discovered that as a patron I am now responsible for picking up my held items from a new holds shelf, instead of the clerk getting it for me from behind the counter. Iiinteresting. Anyway, I thought it was a good time to share a few of the books I've recently read, before I start on a new binge. (On the to-read-soon list are Nation by Terry Pratchett, Graceling by Kirstin Cashore, and the just-acquired Skunk Girl by Sheba Karim.) 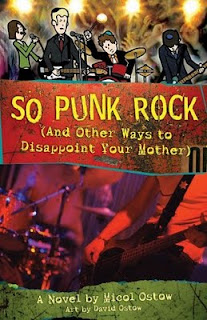 Micol Ostow's So Punk Rock, with accompanying cartoons by David Ostow that complement the story, is a nice addition to the growing oeuvre of "hybrid" novels that are part prose, part comic. The illustrations and comic strips add little extra humorous asides to the written story, which follows Ari Abramson and his dream to form a band...sadly, all he's got for band members are his best friend Jonas, who becomes corrupted by small-time fame; the completely socially inept and Torah-thumping Yossi Gluck on drums; and Yossi's little sister Reena on the mic. As the Tribe gradually learns to play more than "Hava Nagilah" and gets local gigs more high profile than local kids' bar mitzvahs, their new status as the hottest band at Gittleman Jewish Day School brings out sides to their personalities that they never knew existed. Suddenly, Ari finds himself juggling Yossi's religious values, Jonas's ego, his own family life and scholastic future, and a potential romance in this light, funny novel. Steeped in East Coast Jewish culture, it's also sure to appeal to music fans. 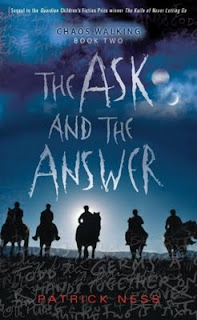 The Ask and the Answer by Patrick Ness is the sequel to The Knife of Never Letting Go, which was dark, dystopian, frightening, and impossible to put down. Truly dangerous foes abound in Todd and Viola's world, and at the beginning of this second book in the Chaos Walking series, both Todd and Viola are prisoners to those foes. Mayor Prentiss, the tyrant of Todd's old village, has taken over the town of Haven and made it into New Prentisstown, and Todd suffers first as a prisoner and then laboring under the watchful eye of Mayor Prentiss and his son Davy. Meanwhile, Viola is sent to a house of healing, where she is treated and then apprenticed as a healer to a woman who clearly has no intention of letting Mayor Prentiss continue his dominion over the population. Is the revolutionary group The Answer really the solution, or are they just as ruthless as the existing regime? What role, if any, will the native humanoids of the planet, the Spackle, play? And what will happen when the rest of the ships arrive from space with their cargo of settlers, not knowing that once they land, they'll be subject to hearing the chaotic mental Noise of everyone around them? This was a fitting follow-up to the first book—intricate plotting, intense suspense, and complex motives abound. Thanks to Paul of Omnivoracious and Guys Lit Wire for sending it my way. It comes out Sept. 8. 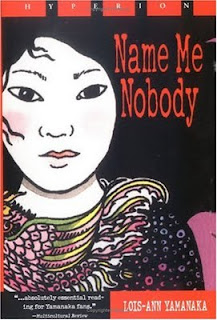 The last book in today's roundup is
Name Me Nobody by Lois-Ann Yamanaka. As steeped as So Punk Rock is in Jewish culture, Name Me Nobody plunges the reader into the sometimes-uneasy ethnic mixture of native, Japanese, Chinese, Portuguese, and haole (i.e., white) cultures that exists on the Big Island of Hawaii. Emi-Lou Kaya, thirteen years old, is being raised by her grandmother because her mother—who had been a teenage mom—is off in California finding herself. Her one true friend, nearly a sister, is Von. In exchange for Von helping Emi-Lou lose weight, Emi-Lou agrees to keep Von company by joining the local women's softball team with her, the Hilo Astros—even though Emi-Lou is a disaster on the diamond. But as Von starts to find a new identity as an accomplished softball player, and to discover a newly awakening sexuality with a fellow teammate, Emi-Lou gets the short end of the stick—she feels left out, abandoned, jealous, and what's more, is accused of being a lesbian herself, despite having a painful unrequited crush on a guy who's mean to her. This is a torturous story of changing friendships, shifting self-identity, learning who's family, and enduring small-town life on the not-so-Big Island. The island patois of the characters is authentic (at least to a mainlander like me who's spent a little time there), but unfamiliar slang and speech rhythms might throw readers from time to time. If I didn't already know, thanks to friends, the meaning of words like pau, shoots, kine, and shaka, I might have been a little confused. On the other hand, it's a glimpse into an American culture that a lot of mainlanders have very little real clue about—Hawaii, after all, isn't all coconuts, surfing, poi and lying around on the beach having luaus, as we haoles tend to assume.
Posted by Sarah Stevenson at 4:25 PM
Labels: AF, Fantasy/Sci-Fi, Guy Appeal, Humor, Multicultural Fiction, Reviews, Suspense

Enjoy your next round of reading, and thanks for these reviews. Great work.

Just added Name Me Nobody to my library queue. Thanks

Thanks for the nice review. Glad you enjoyed the book and glad to be in the company of some other reads which sound incredibly interesting.

Thanks, guys, and thanks, David, for stopping by to leave a comment! We love it when authors visit.

MUST READ So Punk Rock! Also, I'm too chicken to read The Knife of Never Letting Go, it sits on the shelf and mocks me. I was waiting to read it 'til the sequel came out, because everyone wailed so loudly about how it ended, so now I'm ready!

Speaking of picking up one's holds instead of having the clerk/LA do it, I was one of a number of people concerned with privacy. After all, now it's so easy to see what's come in and sooo tempting to pull that brand-new book off the shelf just to see if I want to put it on hold myself.