Tera Lynn Childs' previous novels dealt with various fairytale creatures in moderns settings, so superheroes was a perfect next step. I'm not a huge fan of superheroes for various reasons, not the least among these is that the canon is largely majority privileged, and the same is true here, but as a YA novel, this one still falls solidly in the category Aquafortis calls, "reasonably entertaining."

Synopsis: Kenna is an Ordinary, which doesn't just SUCK but it sucks BIG TIME. She's over it, though; her Mom works in the lab at the League of Superheroes and she interns for her Mom, so it keeps her busy. The Supers overlook her - a lot - with the prevailing attitude that she needs help or saving and that she's basically useless for anything - even cleaning up a lab that gets broken into. But, that's fine. The Supers - Villains and Heroes - don't bother her. Her mom's cooked up a vaccine to make her immune, and she's been immune forever. Mind wipes? Nah. Flinging her around the room? Nah. Kenna might be powerless, but she'll go toe to toe and scream in anyone's face. She believes in the power of her temper, if nothing else.

That kind of comes in handy when villains break into the lab one night.

First, villains aren't supposed to be that hot. Second, they're not supposed to jump in front of danger for you. And third... okay, they're just not supposed to be that hot. Seriously. Kenna is pretty brain-spun by the whole experience (also, the hotness. Did we mention Villain Boy is hot?). And the surprises keep coming - about the people she thought she knew, about the League, and about her own family. From gentle bemusement, Kenna plunges into feeling betrayed and furious -- and more than a little hurt. As the twists in her story are suddenly revealed, Kenna doesn't know who to trust, who is telling the truth, and what's worth fighting for... but she's always known that she's going to fight - because without superpowers still doesn't mean powerless. 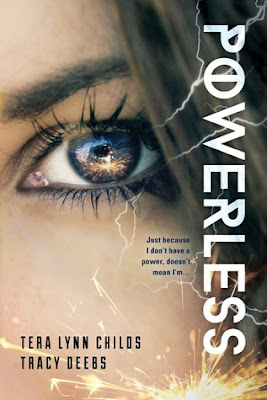 Observations: This book is engaging and fast-paced, and, in a word, cinematic. With all the superhero films out there, it's easy to see how this one would translate to film, especially with the descriptions of The Hotness (seriously, the descriptions of the boys in this book made me smile), the testosterone-poisoned villains for comic relief, and the action-hero adventure pacing. Additionally, this is the third "get your grrrl power on!" book I've read this Cybils season, and it's making me smile. Against the balance of books presenting themes which seem to say "love is going to make it all better" and "teens must save the world but will risk all for a cute someone because gullible," this is good to see.

Another interesting theme that surfaces in this novel is the theme of Doing Right. Kenna is someone who thinks very much in terms of black and white: supers are good, villains are bad. It's how most people think - how Americans tend to think of our country, for instance. Maturing helps most people understand that we are not lawful good only - sometimes, a country's white hats move into deep shades of gray that edges right into charcoal.

I was pretty disappointed that Powerless is only a title and breaks down as a concept; Kenna is a white girl whose mother works in a lab. She has access, privilege and is far from powerless, and this novel would have been a great place to discuss what power we do have when we're privileged, and now to work on behalf of those who are less so.

This is the beginning to a series called The Superhero Agenda, and while the end isn't a cliffhanger, this novel is largely set-up for all their agenda items. I suspect this series will have many fans, and many waiting with baited breath for RELENTLESS to drop next summer.

Conclusion: Despite Kirkus' haughtily deriding this as "fluff," escapist reading is not a bad thing, because sometimes we all wish we were elsewhere. If your 'elsewhere' includes a snarky girl and her Hotness, as well as superhero capers, mad scientists, and fighting for justice? Then have I got a book for you...


I received my copy of this book courtesy of the public library. You can find POWERLESS by Tera Lynn Childs & Tracy Deebs at an online e-tailer, or at a real life, independent bookstore near you!

Posted by tanita✿davis at 1:54 AM
Labels: Fantasy/Sci-Fi