NB: Author Cat Winters is a go-to for historical fantasy for many, and the covers of her first two novels, which also took place in the early 19th century, were atmospheric and memorable, sifting through history, complete with wonderful black-and-white photographs, to reveal something important and disturbing about today. This novel, which is set in the roaring Twenties and the heyday of America's love affair with fast cars, fast women, and bootlegging, is no exception. Winters frames this novel within the story of Hamlet - and if you'll recall, that play ends with a pile of bodies. Readers should be aware of a content warning for Klan appearances, lynching & racism-related violence in this novel. Though the plot isn't ripped from today's headlines, but yesterday's, readers may find themselves distressed at the similarities.

“I believe that 'love' and 'wrong' are two deeply unrelated words that should never be thrown into the same sentence together. Like 'dessert' and 'broccoli.”

Synopsis: Hanalee Denney is biracial, and her father, Hank, who was black, has died under mysterious circumstances. Hanalee now lives uneasily with her white mother and her new white stepfather, Uncle Clyde - Clyde was the last one to see Hank alive. The boy whose car struck and killed her father, Joe Adder, swears up and down that he'd merely broken Hank's arm and a leg -- and that he was nowhere near death when Joe sent Uncle Clyde to him. Hanalee's conversation with Joe was helped along by a pistol -- and so she's pretty sure he's telling the truth. Maybe.

Of course, it's hard to take the word of someone like Joe... who is an Oscar Wilde, after all.

Hanalee didn't know what an Oscar Wilde was, -- but, she finds out. And it turns out that she and Joe are a minority of two, in their little town. According to the Klan, folks like them aren't supposed to exist. Neither are ghosts, either, but ...apparently, one does. Hanalee's father is haunting the neighborhood. Taking her courage in hand, Hanalee goes to find out what he has to say... 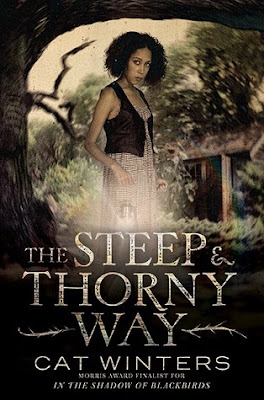 The Elston, Oregon where Hanalee is growing into womanhood isn't the town she remembers as a child. Her parents' marriage was illegal -- and the "one-drop rule" is in full force; even biracial, Hanalee will never be allowed to marry, and further schooling will soon be unavailable to her. Joe's in danger of being forcibly sterilized. When Joe informs her of the tail end of a plot that maybe fingers her stepfather for her father's murder, she is wild to follow it up - but there just aren't many leads, or many options open to a colored girl in racist Oregon. Also, there aren't that many people who care that a black man died. With her mother urging her to stay calm -- and stay safe -- and with Joe hiding from the Sheriff, and his own family, there's not danger and fear around every corner. But, somewhere, too, there is also the truth, and Hanalee is going to find it.

Observations: I love that the title is about religious hypocrisy, and is taken from Hamlet, I love the cover of this novel, and that the hours of research the author put into it show. Oregon in the 20's -- and, not gonna lie, in some pockets, well beyond those years -- was a scary, scary place for people who were black. The charter for settling the state had basically a proviso: if you're black, don't bother, which was vastly different from the rest of the more easygoing West. Sundown towns aren't just a horrific remnant of the South; many people were hounded to death or died more directly at the hands of the Klan in Oregon. And of course, their agenda didn't stop with racial purification, but moral purification. Gay men and women's lives were made a living hell, as they were sterilized and incarcerated and beaten, so that the state would be "purified." This is a history which makes us shudder and turn our faces away -- but it's a history which should not be forgotten. How do we remember this history? By vowing never again, not today, not tomorrow, and doing all in our power to keep the topic something that isn't a secret shame, but a public reminder.

Conclusion: Despite its heavy subject matter, this novel has a dreamy, important friendship in it - not a romance, but a friendship. It has moments of quirk and humor, as most Winters' books do. While I don't as clearly see Hamelet's story throughout the novel, this is an excellent, spooky, and generally horrific novel which brings to light Oregon's racist roots and reminds us of what it takes to combat intolerance and hate -- sustained effort, taking hits for each other.


I received my copy of this book courtesy of the public library. You can find THE STEEP AND THORNY WAY by Cat Winters at an online e-tailer, or at a real life, independent bookstore near you!