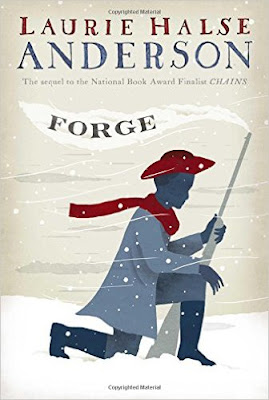 Synopsis: Forge and Ashes are the 2nd and 3rd books in the Seeds of America trilogy by Laurie Halse Anderson. Way, WAY back in 2009, I reviewed the first book, Chains, and was so glad to know there was a sequel in the works: it was an absorbing tale of the difficulties of life as a slave in colonial America. Well, the sequel came out in 2012, and it took me so long to get to reading it that I am sorry to admit I forgot a lot about what happened. As it turns out, though, there is a change of narrator in Book 2, and some time has passed, so my sieve-like memory was not an obstacle to my enjoyment of the story.

Book 1 was told from the point of view of the young woman Isabel, who was freed along with her sister when their master died, but then forced by his nephew back into slavery for an unkind Loyalist family. Book 2, Forge, takes place after the events of Chains, but follows the story of Isabel's friend Curzon, a runaway slave with forged papers who ends up joining up with the Patriot Army at Valley Forge. He finds meaning in his fight for freedom, he finds friendship in his fellow patriots (some of them), and, of course, he finds Isabel in his life again. She's trapped in a bad situation, and Curzon's avoiding his own past, which seems to insist on chasing after him…

Book 3, Ashes, returns to Isabel's viewpoint. Having fled Valley Forge, she and Curzon are headed to the South to find Isabel's intellectually disabled younger sister, Ruth, from whom she has been separated for a handful of long years. After rescuing Ruth from a plantation, along with her friend Aberdeen, the four make their way back north. To Isabel, the hardships encompass much more than just the journey; for one thing, Ruth is angry at her sister and doesn't want to accept her back into her life. For another, Curzon seems obsessed with his newfound ideas of freedom after serving with the Patriots. But it seems that the struggle for freedom is where their destiny indeed lies, and they all make their way to the front lines at Yorktown… 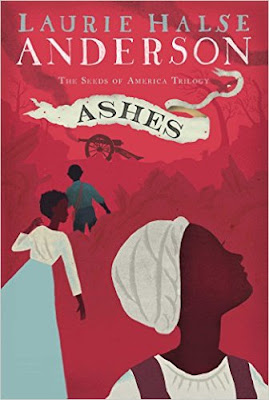 Observations: I ended those synopses with ellipses (hee) because I don't want to give away too much of the adventure of these two books—part of the enjoyment is following these determined, brave, honorable protagonists as they overcome obstacle after obstacle, all for the sake of the type of personal freedom we as contemporary readers take for granted, and the security of their loved ones. Their stories are also gripping because of the fascinating and important window they provide into colonial America, and what it was like to navigate society as a slave, a former slave, a servant, a free worker, a soldier, a woman on the battlefield. These are less-commonly told stories that give us a much fuller picture of what life during the era was actually like, and they are interwoven with the stories of real-life people who are included in the bigger-picture story, as well as interesting snippets from historical documents. These two books, incidentally, skew a little older than the first one, as the characters themselves age.

Beyond the value of these books as historical portrayals or as gripping tales of personal struggle, they also have amazing depth in terms of theme. The idea of freedom, of course, pervades this trilogy: what people are willing to do and to suffer for the sake of freedom; how much they are willing to fight for it; and who they are willing to trust to help them achieve it. The bonds of family, friendship, and love, both within and across color lines, are forged (there's that word again) and tested by the ravages of time and war—and prove themselves to be strongest.

Conclusion: By the time I finished reading this trilogy, I felt newly awed and inspired by the incredible stories of those unsung individuals from colonial America who were nevertheless such a huge part of our past history. The author tells their stories with sensitivity and honesty.

I received my copy of this book courtesy of my library's ebook collection. You can find FORGE and ASHES by Laurie Halse Anderson at an online e-tailer, or at a real life, independent bookstore near you!
Posted by Sarah Stevenson at 8:00 AM
Labels: AF, Diversity, Historical Fiction, Middle Grade, Reviews, Sisters