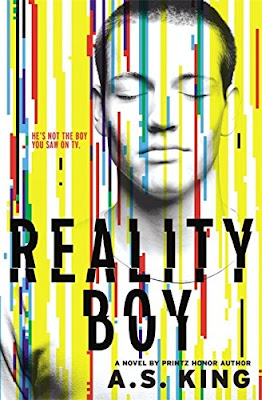 Synopsis: I picked this one up (and got it signed; woot!) at the most recent Kidlitosphere Conference in Wichita—somehow I missed it when it came out a few years ago, but I'm so glad I went back for it, because it's up there with my favorite A.S. King novels.

Picture one of those awful, Nanny 9-1-1 reality TV shows that were so popular there for a while. Now, imagine being a teenager, and having been one of the luckless kids who was featured on such a show as a toddler, too young to have any say about it. Imagine you'd been acting out your anger at your manipulative older sister in all kinds of sad and horrible ways, but thanks to oblivious parents and heartless TV studio execs, you're the one who takes the blame. That's what happened to Gerald Faust. Now seventeen, he's biding his time until he graduates, working a job at the local sports arena and still working on his anger issues. You'd be angry, too, if all the kids at school knew you as "the Crapper" and your awful sister was still living in the basement, making your life hell.

Gerald feels very much alone at the beginning of this novel, but it is those who dare to reach out to him that begin to truly open him up to the world: his boss at the arena, who is everything his mom isn't; and Hannah, a girl with enough troubles of her own that she doesn't seem to care about Gerald's past. In tiny ways, and then in more pronounced ways, his walls start to come down, and his life starts to change. And, to his surprise…he finds hope out there beyond the walls.

Observations: This story was incredibly gripping, told as it was in alternating sections: Gerald's childhood on the TV show, and his experiences with the TV nanny, are juxtaposed with his present-day life and tribulations with schoolmates and family. Some of his problems are new, and some of them just never went away…and through it all, he struggles with his anger and powerlessness. Overcoming his anger, and realizing the power that he DOES have, is one of the core themes of this book. Feeling powerless, feeling like you're subject to the whims of your family and those around you—it's basically a childhood/adolescent truism, but Reality Boy takes it to heretofore unexplored heights.

I had so, SO much sympathy and righteous anger on behalf of Gerald—how could parents do something like that? How could they raise their children in such a dysfunctional way?—and yet these types of small tragedies happen every day, albeit not necessarily in such visible ways. Still, the presence of the media panopticon in this story is frighteningly relevant.

Conclusion: A.S. King does such an incredible job of telling Gerald's story here, making us feel for him AND feel his anger—and making us root for him to heal. Fans of her books won't want to miss this.

I purchased my copy of this book from Watermark Books in Wichita. You can find REALITY BOY by A.S. King at an online e-tailer, or at a real life, independent bookstore near you!
Posted by Sarah Stevenson at 5:22 PM
Labels: AF, Bullying, Guy Appeal, Realistic Fiction, Reviews, Sibling Fiction

I think I might avoid this book like the plague, because I really, really don't like reading about parents being terrible to kids, and the whole concept of reality TV makes me squirrelly, and anger makes me cringe. And I know that King is a really good writer who will make me feel all that anger and frustration and more anger.

Sounds like this would be a good addition to Brandy's Kicked in the Feels category of books to recommend.(From Random Musings of a Bibliophile). But I'm not sure I'll read it!

Thanks for stopping by to comment! Yes, I would say that if it bothers you to see bad parenting in action, this one is very painful. It really did make me feel frustrated and outraged, especially because the situation was, unfortunately, believable. It's a terrifying example of "nobody believes the little kid" in action.