I have a ridiculous love for the novels of Vivian Vande Velde (I also love the alliteration of her name just that tiny shade too much) and her speculative worlds never fail me. I discovered her vampire novel in my 90's YA reading, about the same time I discovered Annette Curtis Klause's vampires, and devoured them both. I'm pleased to see Vande Velde still writing.

This is your little holiday reminder to hit the library and dig up some of your favorite authors, and see what else they've published since the 90's! Vivian Vande Velde has been busy!

Synopsis: Okay, so you're not going to care, but fifteen-year-old Zoe's had a crap day. She fought with her house mother, she stole her file from the office of her group home, and she's just been caught in the rain - so she steps into a bank, where everyone's giving her stinkeye. And then? There's a ROBBERY. And the one guy who's been kind of sweet and friendly to her... dies.

This is not the day Zoe signed up for. 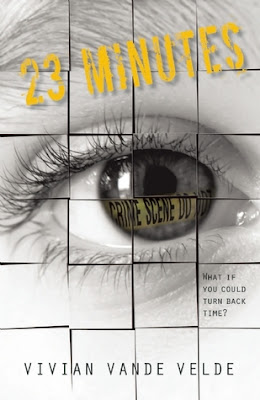 What's worse is that though she's pretty sure her day is her fault -- totally sure, actually -- Zoe has to change the trajectory of this day -- she has that power, in theory. In practice, changing the world by changing your actions? Is darned hard. Sometimes she's too fast. Sometimes she's too slow. And she simply cannot think fast enough with guns firing and people falling on her -- her heart is beating too fast, and there's too, too much at stake.

Nobody looks at her. Nobody truly sees her. Nobody wants a damp, blue-haired girl to stand around, messing up the sanctity of their Adult World. But, Zoe has seen people die and she's got to stop it -- she's just got to... or else, what is her weird ability for? Who is she? What's her life about? Observations: Vande Velde really stretches to determine the boundaries of this paranormal skill - twenty-three minutes is the amount of time Zoe has to change things, and ten times is how many times she can rewind. That's it. Establishing this clearly goes a long way toward helping the reader stay focused. While the book uses a lot of repetition, the focus of each scene is somehow subtly different, keeping the reader worried - and engaged.

This book was both funny and frustrating. It really says something about our culture that a teen is not listened to -- add to that a teen with blue hair, who doesn't look particularly prepossessing, is unaccompanied, has papers which detail her psychiatric history, and is by turns weeping, shaking, blurting, or snarking? She is NOT going to be heard. I knew this, and yet I kept hoping, and trying to think - and outthink - the protagonist, and come up with things she could try to get her very important message across, before the twenty-three minutes were up. I LOVE the mental gymnastics it took to plot this, and I hope to see a lot more uniquely fresh plot ideas like this. I really enjoyed this, even as it made me want to scream.

Conclusion: The Dutch version of this novel made me smile - I hope the paperback American version chooses to display that blue hair!

Vivian Vande Velde has a unique and twisty mind, which we already knew, but she truly put it -- and the readers' -- through its paces in this short, fast-paced novel.


I received my copy of this book courtesy of public library. You can find 23 MINUTES by Vivian Vande Velde at an online e-tailer, or at a real life, independent bookstore near you!

I don't know if this is a breach of internet etiquette and if the modest thing to do is to pretend I didn't see this. But I have to admit to being diligently self-absorbed: I googled my name and found this absolutely incredible review. Tanita (and, World, I do not know Tanita), thank you so much for your kind words. And for getting the story on so many levels. And for loving the Dutch cover as much as I do. I will now back out of the room and switch back to lurker mode.

This sounds so good! I'm definitely looking for it. :) And that cover makes me want blue hair.

@Vivian Vande Velde: Oh, hi! You're very welcome. Thank you for writing an amazing book for us to talk about. I love your brain. ☺

@Sarah Stevenson: I KNOW. I wish blue hair wouldn't be so much work for those of us with super dark hair! Though it didn't help anyone take this kid seriously, still seriously considering it...