Cybils Speculative Reader: ON THE EDGE OF GONE by CORINNE DUYVIS

Many readers know author Corinne Duyvis from her work with the Disibility In Kidlit website. This is her second novel.

Synopsis: Denise is struggling to stay calm. She's researched and knows the rate of survival, knows the details of the deep impact comet that's going to hit Eastern Europe. She knows everyone in her Amsterdam neighborhood is in their shelter -- everyone but her drug-addicted mother who has fiddled and fluttered and has made them late. The shelter won't take them, and now they're delaying again. But, the last delay has given them a two-day reprieve from the underground shelter. It's given them a temporary spot on a generation ship - still grounded, doing repairs, but space-worthy. Denise desperately wants to get herself and her sister on-board, but her sister didn't make it home in time to leave with them, and her mother has smuggled her ketamine along. All the problems that they had before have come along with them; Denise's inability to communicate easily, her mother's drug addiction. Add to that the comet, its temblor aftermath, and the tsunami following part of Norway falling into the sea, and everything feels impossible.

There's no place for them on the generation ship. Passengers have been chosen for their practical skills and contributions. There's no room for a drug-addicted woman and her autistic daughter, Denise is positive. There's certainly no room for soft and beautiful things like cats in this world anymore. Denise believes she's not able, and that her inability is going to keep them stranded. But she's more stubborn than anyone - and her conviction and tenacity matters more than she expects. 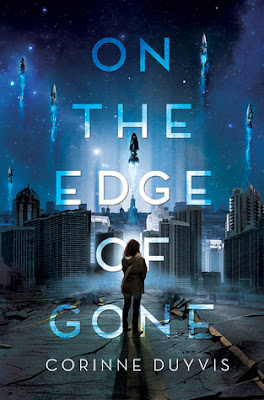 Observations: Politically this year has shined a light on the inequities in our system. We know what is valued, and which lives are swathed in privilege. Denise is Dutch-Surinamese, disabled, dark-skinned, and female. Iris, Denise's sister, is also dark-complected, and was once Denise's brother. Their mother, though white and Dutch, is equally "damaged goods," as a drug addict. Who matters? Who is good enough to be caught up and carried away to a better world in this metaphorical Ark? Denise is uneasily aware of how people see her, with her inability to meet their eyes for long, sometimes not knowing where to put her hands, or how to hold her body. However, unlike many others, Denise has a titanium core. She longs to find her sister -- she keeps searching, over and over, until she finds her. She longs to secure herself and her mother a safe space aboard the generation ship. Through sheer determination, she holds a job, even when her mind is spinning a thousand different directions and she struggles. She has to be a contributing member of her new society, so she... simply becomes one. She works, she schemes, and she plans to make the reality she needs to happen, happen. It doesn't always work easily, but she never gives up -- on her family, and eventually, she learns not to give up on herself. A disability doesn't mean that you can't be a survivor - a hero - and a fighter.

Additionally, there is a strong subtext in this novel about self-care, and deciding what boundaries you need to lay with the people around you. Much of the anxiety and pressure that Denise finds herself under is because her mother is unreliable as a provider. Denise takes on that role for herself until she can work alongside of her sister, but her mother never truly fulfills the role she's meant to fill, except to unnecessarily explain and highlight Denise's autism. When she can, Denise sets a boundary - and that I'd love to see more of in YA lit.

Conclusion: This probably wasn't the best novel to read when I am already feeling agitated -- the nail-biting tension within the world-building is way too good for this to be a comfort read, as readers will really feel the mounting panic in anticipation of crowded underground refugee spaces, the horror and the desolation at the natural disaster(s) which follow, and the panic of the narrator, as she struggles so hard to adjust, to focus, and to be present in this new and dreadful reality. If you're looking for a book that tells a whole store yet still leaves the door open for a sequel - perhaps? - and is a quick-paced, slightly agonizing, yet excellent read, have I got a book for you...


I received my copy of this book courtesy of the public library. You can find ON THE EDGE OF GONE by Corinne Duyvis at an online e-tailer, or at a real life, independent bookstore near you!

Posted by tanita✿davis at 1:25 AM
Labels: Diversity, Ethnicity and YA Literature, Fantasy/Sci-Fi, Post-Apocalypse Fiction

I'll have to check this one out! I saw it show up in our e-library a while ago and was curious about it.

Thank you for all these highlights of the Cybils nominees! You make them all sound so good; I don't know which ones I should root for! (I'm a round 2 judge, so I know I'll be reading some of these soon.)