Full disclosure: I've served any number of times with Gwenda Bond on Cybils panels and consider her a sharp cookie as well as a friend. As we've never had a slumber party or a trapeze act together, I'm fairly certain that I can review Gwenda's novel without undue bias.

The whole superhero thing during childhood was ubiquitous and inescapable - from The Greatest American Hero, that weird Automan series (what was THAT about, ABC?!) and endless Superman films on the big screen and rerun on the small, my entire childhood was informed by caped crusaders... which is why I was easily able to abandon all of that as baby stuff, and move on. Then Smallville came on, and ... well. *cough* Those are some hours I won't get back. But, it was all to the good, because all that teen angst sparked more imaginations than mine. So, we know the trope of The Chosen One from our hero-centric narratives, but what is The Chosen One like as a teen? The best gift we received to explore that, of course, was Harry Potter - and now, we've got Lois Lane. The not-exactly-chosen-one. The one who volunteers. 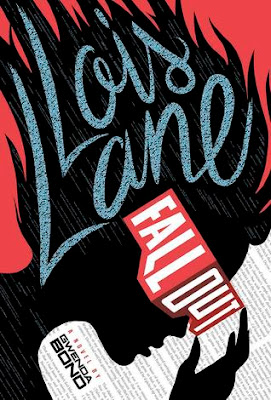 Summary: If she can just stick to the plan, Army brat Lois Lane will manage to blend in at Metropolis High. If she can keep from pointing out the fallacies in the principal's attitude toward bullying. If she can keep her nose out of what's going on with her new job at The Daily Planet's teen newsmagazine, "The Scoop." If she can steer clear of this troubling gang of... gamer nerds? If, if, if. Two little letters that mean failure, because nope, Lois can't do it. She's nosy, but it's because a good soldier always needs to know the lay of the land -- which is important if you're always The New Girl. Lois also knows what it's like to be alone - and lonely - and can't stand seeing anyone bullied, so it's pretty disturbing to see someone begging the principal for intervention on her first day... and seeing her not get it, and the bullying continue. Ugh. Since Lois will be in Metropolis for the foreseeable future -- unless The General puts her in military school, as he often threatens -- at the very least she's going to make sure Metropolis High is a decent place. With her online buddy-maybe-more friend SmallvilleGuy and the new friends at "The Scoop" behind her, not hackers, conspiracy theorists, VR games, barefoot elves or even a five-headed monster can stop her -- she hopes.

Peaks: I cringe to hear characters described as "snarky" or "wisecracking," because most of the time the dialogue that goes with those words seems staged to resemble air-brushed Movie Kid speech. However Lois doesn't JUST snark, she also deadpans, she quips, she digs, and she's really, really good at it. Lois shoots off her mouth like anyone does, and though she occasionally puts her foot in it, that just makes her sound like a normal, incisively honest teen saying the things everyone is THINKING. Since Lois isn't accustomed to having to worry about the fallout from speaking her mind ...she doesn't. Not a lot, anyway. She's a good faker, at the very least.

The appearance of Nerdfighters in this novel - slightly myopically immersed and either weeping or laughing at their books, phones at the ready to record their latest reactions via vlog - made me laugh out loud. The representations of "type" of persons is closely matched by a diversity of class and ethnicity - the teens seem to organically and naturally to transcend the "American Standard," which is nice. 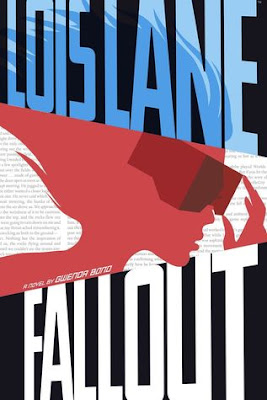 And can we talk about the covers??? Both the hardback and the paperback have bags of style, and are just amazing, not only reflecting the colors of Metropolis High, but... well, our Kansas boy in a cape as well. Swoon!

Especially Apt For...: People who loved Smallville and Lois & Clark, people who are fans of the teen sleuth, a la Nancy Drew and Veronica Mars; people who love stories of intrepid reporters a la Fitzhugh's Harriet or Pratchett's William de Worde, and also for everyone who loves books about do-gooder sidekicks like Hermione Grainger and Wendy Watson, aka "Dub-Dub" from The Middleman.

Conclusion: This was such fun - more fun than even I expected. With over-the-top, truly scary villains, a conspiracy theory site, this series debut is fast-paced, tautly written, absolutely immersive yet imminently re-readable, and will leave readers greedily impatient for May 2016 when we'll get the next one.


I sourced my own copy of this book. You can find FALLOUT by Gwenda Bond at an online e-tailer, or at a real life, independent bookstore near you!

I look forward to reading this one!

@Sarah Stevenson: It was just EXCELLENT, blew me away!!! You'll love it.